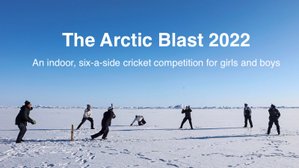 The temperature may be dropping but that doesn’t mean the cricket has to stop!

The Arctic Blast is a festive, indoor six-a-side cricket competition for girls and boys from local clubs (not just Richmond CC).

Four teams of six will play in a round robin tournament with all teams involved all the time.
With two matches running concurrently there’s no sitting around!

Each team will play three matches.

When is the Arctic Blast?

Where does the Arctic Blast take place?

What do the players need to bring?

We’ll be using indoor balls, appropriate to each age group.
Players don’t need hard ball kit, but can bring their own bats and gloves if they want.
Parents / coaches don’t have to stay as we’ll have coaches and team managers.

How much does it cost to enter?

How do I book?