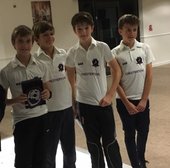 From our Junior Correspondent 1 of 7

This is the first of our From our Junior Correspondent series - this will feature articles from junior members of the club. A big thank you to Oscar for having the courage to step up first.

I started at Richmond Cricket Club in Year 2 with seven other school mates from Ravenscourt Park Prep School (RPPS) in 2013. I was six at the time, and I’m thirteen now, and this year my age group will be the U14s (if we ever get to play!). I was quite surprised that so many of my classmates decided to join Richmond at the same time, but our parents thought it would be more fun if we all joined together.

Whilst we weren’t much to look at in the early days, Richmond gave us a head start and taught us the skills that helped us improve quickly. Last year, we all played for the U13s, and although we have long since left RPPS to go off to different secondary schools, playing for Richmond Cricket Club is something we have all kept in common, and which has helped us to stay close friends. Of the original eight, seven were still playing for Richmond last year, and more often than not, my old RPPS classmates would usually make up about half the team.

We started playing 11-a-side hard ball matches at U9 (well, actually we were called the U10Bs in those days). In our first hard ball game, all the other boys either wanted to bowl or bat, and no one would volunteer to be the wicket keeper. I decided right then to grab the gloves. I wouldn’t ever want to change that decision, and I’ve been the age group A Team wicket keeper ever since. I love being a wicket keeper because it means I’m close to the centre of the action for a lot of the game, so it’s never boring.

Together we’ve played and won a lot of cricket games over the years, and whilst some players have left, and others joined, my age group has always had more than its fair share of excellent players. Over the years, we’ve had a lot of fun and won a few titles as well, such as the Middlesex South U11 Division One, the Middlesex South U12 Division One and the Mid Surrey Colts U13 Division One. I’ve always been proud to play for Richmond, and it’s been a big part of all my summers. It’s been great to compete and win some competitions, but the best part is that I have done it with my old school mates, and all the other friends I have made at RCC.

To ensure that RCC can keep Oscar and his school mates together consider donating to our appeal.