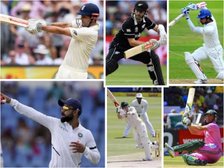 From our Junior Correspondent 4 of 7

With cricket suspended for the foreseeable future, now is the perfect time to look back to the past, and truly appreciate the spectacular players we have seen over the last 10 years. We were lucky enough to even watch one of the following players live at ODP. This is my team of the decade, based on achievements in the past 10 years. Players such as Sachin Tendulkar (retired from internationals in 2013) did not play long enough into the decade to be considered. This is a team based on achievements in all three formats of the game, with Test match performances given the most importance and domestic performances largely ignored (apart from the IPL). As is often the case with such teams, many great players have had to be left out. There is no Rohit Sharma for example in this top 6. I expect that many of you reading this will disagree with some of my selections. That’s the way it should be. Let me know your selections in the Comments down below.

1. Alastair Cook
The only cricketer this decade to earn a knighthood, Sir Alastair Cook scored 8818 Test runs at an average of 46.41 as he opened the batting in every single England test match for over 10 years, until he finally retired in 2018. In his final innings (147), he became the fifth-highest run scorer and highest scoring left-hander in Test cricket, and bookended his decade in centuries after his ton against Bangladesh in 2010. Despite limitations in the shorter format, he excelled at the highest level for England – his 766 runs in a single Ashes series trail only Wally Hammond and Don Bradman. A stalwart of the decade, he is irreplaceable, as England are constantly reminded.

2. Kane Williamson (vc)
With David Warner removed for egregious offences against cricket, and the best technique in the modern game, New Zealand captain Kane Williamson could play anywhere in this batting lineup. Over 14,000 runs this decade. 34 international hundreds, against every team and in every country apart from South Africa. The fastest ever player to 16 Test centuries. Averaging 51 in Tests, 47 in ODIs and 33 in T20Is, Williamson is able to perform across all three formats. He has been able to captain his side to a World Cup final, winning Player of the Tournament in the process, handling one of the most devastating losses in the history of sport as calmly and graciously as possible. The ultimate team player.

3. Kumar Sangakkara
One of the most consistent and productive players in the history of the game, Kumar Sangakkara effortlessly slots in at number three. While playing only 42 Tests this decade, he scored 17 hundreds and averaged over 60. He scored 12,000 runs in internationals. He was a player made for the big games, averaging 100.6 across the 2011 & 2015 World Cups. When he retired in 2018, he was the second highest run scorer in ODIs and the sixth highest in Test matches. As a specialist batsman (as he has been for the entire decade) his average in Test cricket is second only to Bradman.

4. Virat Kohli (c)
20,960 international runs this decade (over 5,000 more than anyone else). 69 centuries. Since becoming captain, his game has reached another level. 33 wins from 53 Tests, averaging 66.88 across all three formats. The perfect figure for the modern game, he could well challenge Tendulkar’s record of the 100 100s as he bats into the next decade. If he continues like this, Kohli will enter the conversation for not just the team of the decade, but the greatest of all time.

5. Steve Smith
Steve Smith is a shoo-in for this team (Sandpapergate notwithstanding). He started the decade at number eight for Australia, a ‘specialist fielder’ who bowled a bit of leg spin. Now, he is arguably the best Australian batsman since Bradman. Averaging over 60 in Tests (over 80 since his return from suspension) and 52 in ODIs, he is a man talented across all three forms of the game. With his instantly recognisable idiosyncrasies and unique style, Smith has become one of the best batsmen this decade with relative ease.

6. A. B. De Villiers (wk)
He may have kept in only 22 Tests this decade, but AB’s talent is undeniable. If BJ Watling had scored more runs, or Dhoni was a better Test match batsman, then their superior keeping would put them in the team. However, there are few wicketkeeper-batsmen more talented than De Villiers, who has scored over 12,000 international runs and 34 hundreds this decade. At the start of the decade, he averaged 65 in Tests and scored a career high 278* in over seven hours. One month later, he scored the fastest ever Test century for a South African against India. In 2015, he scored the second fastest ever century in professional cricket against the West Indies – it took him just 31 balls. It was one of 21 ODI hundreds, that contributed to his world-leading average of 64, and secures his place in the middle order.

Look out for numbers 7-12 in my next instalment.

Please consider donating to our Appeal.