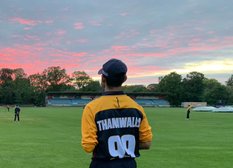 Big on fight but low on points

The 1's and 2's secure draws against Teddington, the 3's win easily but the 4's and 5's lose heavily.

Whilst the day did not produce the points return that we might have hoped for, both the 1's and 2's demonstrated that they are prepared to scrap for every point in the League and, hopefully, fight themselves out of trouble. Meanwhile, the 3's won very easily but the 4's and 5's lost heavily.
On an excellent pitch at Old Deer Park, table-topping Teddington won the toss and chose to bat. Richmond bowled accurately but a stand of 114 for the 3rd wicket saw the visitors well placed for a very high total. However, a flurry of wickets restricted them to 272 for 9 off 61. Whilst Richmond's reply was slow initially at 63 for 1 off 20, we looked as though we had laid the foundation for an exciting finish. It was not to be however. Jake Dunford was adjudged caught behind and Will Hunt fell to an outstanding catch. Four more wickets fell in the next 10 overs to leave us 123 for 7 with more than 22 ofers left. Tanmay Thanawalla and Will Robertson then dug deep to bat out the remainder of the match, Tanmay finishing on 52 not out off 128 balls and Robbo just 5 off 56. A losing draw and 1 point, combined with Twickenham's demolition of Ealing means that we are now 14 points adrift of safety. Wins are needed and next week we play bottom of the table Hornsey when hopefully we can regain some ground before the final 5 matches of the season.
The 2's remain in the bottom two despite a winning draw against Teddington at Bushy Park. We lost the toss here as well but some excellent bowling restricted the hosts to 219 for 6 off 55 overs. In return, Tom Spearman led the charge with 75 but a long-tail and 10 overs difference led to the decision to take the draw, Richmond finishing on 191 for 6 off 45.
The 3's trounced North London 3's by 9 wickets dismissing the visitors for just 118 before knocking them off for the loss of just 1 wicket. Jean Fourie, after a long absence following a road accident, returned with 5 wickets whilst there were 40's for both Josh Dudley and Pete Louwrens.
A young 4's side did not score enough runs at Winchmore Hill being dismissed for 125, a total that the home side got past for the loss of 3 wickets. The 5's meanwhile went down to Harrow St Mary's 3's who scored 323 for 8. In reply we scored 212.
Share via
FacebookTwitter
https://www.richmondcricketclu
Recent news