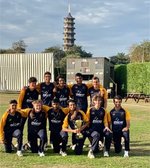 The final weekend of the League season ended in a much-deserved triumph for the MDL side but before that wonderful event, the club had to come to terms with the fact that both the 1's and 2's ended up being relegated from the Premier Divisions of their respective tiers. This means that in 2023, for the first time in our history, our two senior sides will both be in the second level of competition.
The 1's needed to beat Shepherds Bush and hope that Crouch End could overcome Twickenham. It didn't happen as the Bush recorded 285 off their 50 overs and we came nowhere near. It should be said that news of Twickenham's victory arrived midway through our reply and probably contributed to the collapse of our innings. Meanwhile, at Stanmore, a localised deluge washed out the 2's match and whilst, at one stage, it looked like Teddington might beat North Middlesex, in the end it was not to be.
The 3's easily beat Barnes to consolidate 3rd place. The 4's lost a close match against promoted Hampstead 4's and managed to secure 2 losing bonus points which were crucial to our survival as Twickenham 3's lost heavily to Eastcote. Having had 10 points deducted after just 3 games for a registration offence, the survival of the 4's was well-deserved. The 5's meanwhile lost a close match against Hampstead 5's but finished 25 points clear of relegation.
After a fun evening it was over to the MDL side to bring real smiles back to the faces of all Richmond members and they did not disappoint. Shan Shori tells the story of the day:

A bright and sunny first Sunday morning of September saw Richmond U21s host Crouch End CC in the Middlesex MDL Trophy competition, the final of which has been traditionally held by Middlesex Cricket at Old Deer Park.

After winning the toss, skipper Tanmay Thanawalla elected to bat. In the face of tight and disciplined bowling from Crouch End, several top order batsmen got themselves in but failed to convert their good starts. Nevertheless, good contributions from Vansh (32), Dru (28), Ayaan (28), Tanmay (25) and Eddie (22) enabled the team to reach a total of 177, although the team committed the cardinal sin of not using up all available overs and were all out after 37 overs with three overs not batted. At the halfway mark, Crouch End were no doubt the happier of the two teams and probably enjoyed their tea more.

Nevertheless, at 113-2 and having kept up with the required run rate, Crouch End were in the box seat and on course for victory. However, Richmond had yet to bring another couple of their star bowlers to the party and come to the party they certainly did! In a rousing atmosphere and in a thrilling final 12 overs of skilful and intelligent bowling, Dru Shori (6-0-18-4) and Will Knowles ( 6.5-0-26-1) turned the game on its head in front of an excitable and appreciative crowd. With Crouch End still capable of winning up to the final over of their innings, they were bowled out for 165, leaving Richmond as the victors by 12 runs.

It is rare for a team to win a final without a high standard of fielding and all the lads put in a great shift including Josh Dudley and Sean Aggarwal and two sharp stumpings from Eddie, but the high water-mark was Will’s work which included a stunning run out, hitting the stumps with a direct hit from the boundary and an astonishing high-circling catch in the outfield.

The match was played in a competitive but excellent spirit by both teams. It was a fabulous day for the lads, supporters and club and comes on the back of 10 out of the 11 players winning the Middlesex U19 T20 competition last week !

So, a season of highs and lows comes to an end. Middlesex Champions at both Under 21 and Under 19 level, it should be remembered that the 1st XI also won the County T20 competition, reached the last 32 of the National Club Championships and were semi-finalists in the Middlesex Cup. With our women's XI winning the Surrey WCL Elite T20, the Girls Under 15's runners-up in the National Cup , winners of the Southern Counties Trophy and a host of other junior successes , 2022 has by no means been a disaster. In fact, the relegations apart, it has been a great success and we all need to remember that. We do have some key things to put right but we have much to look forward to at Richmond. My thanks to everyone who played a part this season - captaining sides, managing teams and being part of our great club. The 1's and 2's will bounce back. The future is bright and its in our own hands.