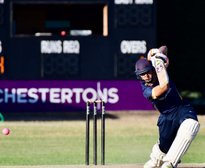 Covid Cricket: U17 Boys in the truncated 2020 season

The first of our reports from the junior age groups

Thank you to all parents, supporters and helpers for a season that we were all fortunate to share and enjoy
Shan Shori - RCC Manager, Parent, Umpire and more!

2020 will be remembered for one thing above all else but at least Covid-19 had the courtesy of taking a break from wreaking its havoc for some eight weeks or so in order to allow the important business of youth cricket to be played. Amid novel social distancing protocols involving the boys sanitising their hands every six overs, spectators being more dispersed around the grounds and celebrations restricted to the bumping of fists, our U17s managed to have an enjoyable cricket season, winning an informal but competitive Middlesex South Area league on a sun-dappled September evening in Ashford on the final day of the season.

In winning the league, the team only lost one of its eight matches and pipped strong opposition from Teddington and Sunbury cricket clubs. As area winners, it was a shame that there was not enough time this year for the boys to proceed to the usual county-wide knock-out stages. The team was ably skippered by Dru and it was lovely to see a good team spirit amongst the boys. The batting was led by top-scorers Dru, Eddie, Tanmay and Anosh, who were backed up by important contributions from Sandy, Ayaan, Zack and David. The bowling honours were led by James, Alex, Toby, Kyle and Dru with important contributions from Kartik, Vansh and Ayaan. Tanmay and Huw did a sterling job behind the stumps while Lucien, Lachlan, Vivek, Monty and Ben were also important team members and performed well in comparatively limited game time.

The team was managed by the irrepressible Andy Dowding and supported by Messrs Harris and Shori, with scoring duties expertly discharged by Messrs Doughty and Mitchell. Thank you to all parents, supporters and helpers for a season that we were all fortunate to share and enjoy.