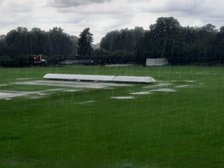 RCC Cricket Week is one of those traditions. So traditional, in fact, that its origins are a mystery to those now at the club - even historian in chief Chairman Chris Goldie. It has been going “Ever since I can remember…..but I don’t know when the first one was”. So somewhere from the mists of time. In terms of the matches, The Stage and The Law Society have been constants, and the MCC switched from every second year to every year about 15 years ago. Certainly for the past 10 years or so it has been: Monday the MCC, Tuesday The Law Society, Wednesday The Stage and Thursday LSE Staff.

So to 2021. This year, on the Friday evening (9th July) before the traditional Cricket Week, we had a curtain raiser. Old Deer Park hosted the MCC Ladies vs a Middlesex Womens’s Cricket League XI in a T20 game, meaning that RCC would host the MCC twice in 4 days. The MWCL XI was selected from eleven clubs across the county with our new Director of Women's Cricket, Sarah Blyth-Wood, representing Richmond. Two of our most talented junior cricketers, Charlotte and Emily, were also in a squad of 13.

MCC won the toss, chose to bat and reached 123/7 with runs from Megan Burton 38 (52 balls) and Charlie Bawden 21 (20). For the invitational XI, wickets were shared with Emil taking 2 for 13. Emily (2-13). The champagne moment was Hubbard's ramp shot off Tunnicliffe taken one handed running backwards at short fine leg by Charlotte.

In reply, the invitational XI cam up a little short with 103/6. Sarah top scored with 32 (52) and there was a quick fire 27 (10) from Tunnicliffe (four 4s, one 6). Wickets were again shared with Marilyn Smith taking 2 for 6. Many thanks to the umpires (Lizzy Conder and Deborah Burns), scorers (Alison Bruce and Laura Rolles), Middlesex Cricket (Kari Carswell and Sharon Eyers) and the caterers (Bombay Chow Restaurant).

On Monday 12th July the MCC arrived “a little dusty”, according to our own Steve Stacey, the morning after the night before that was the Euro 2020 football final. A good day for the “the MCC win the toss and bat” tradition! A strong MCC side was made up of primarily MCCL Premier Div players and included RCC’s Steve Stacey and Micheal Wood to spearhead the bowling. The RCC XI was a glimpse into the future: captain Zain Bhatkar, Dan Fryer and James O’Farrell (all low to mid twenties) were the old men of the side, and they lined up alongside 2 under 21s, 2 under 18s and 5 under 17s. It was still a competitive RCC lineup which shows the junior talent coming through the club.

The MCC made a brisk start against the new ball pair of Arun and Alex, with a dropped catch in the covers proving costly. Kartik then took 3 for 27, Kyle 4 for 35 and James 2 for 52 as the MCC chased runs and were all out for 205 off a little over 45 overs. There were 50s from Stoughton and Adair for the MCC. RCC reached 14 for 1 before the heavens opened - the square and the outfield were flooded in minutes in some of the heaviest rain seen in Richmond for many years. It was an enjoyable start to Cricket Week, even if the finish was frustrating with the game set up well.

That heavy rain was to claim day 2, with the game against the Law Society abandoned without a ball being bowled, despite warm sunshine. So onto day 3 and The Stage.

A great day was had with excellent cricket skills on show and RCC fielding a team made up with plenty of young talent - including senior debuts for three U14s (Will, Hugo and Thomas) - with Jake Dunford (first team keeper) in his first game as captain for the club.

RCC batted first. The innings was given a solid platform through the opening pair with Brucey knocking off his first hundred in style and also Nels (Charlie) with a classy 60. Batters contributed throughout the order to declare on a good total of 250.

In reply, wickets were shared around, Hamza started RCC off well with 3 wickets in his opening spell. The Knowles brothers kept things tidy helping restrict the Stage to under 70, with them managing to hold on to block out for the draw. An enjoyable day in the sun.

The final match, on Thursday, saw youthful RCC side take on LSE Staff.

On a cloudy but warm day, Richmond welcomed the LSE staff. With 40 overs per innings, 10-player Richmond (due to a late drop out) won the toss and elected to bat first.
The innings got off to a slow start, with some accurate bowling from the LSE opening pair (Siddick and Harris), and the first wicket fell after 10 overs with 28 on the board. Raunak continued with Sam and started to accelerate, reaching 96 off 24 when Sam departed for 39.
Kyle then batted with some panache, reaching 50 (retired) off 43 balls, with only the run out of Raunak for 49 marring an otherwise excellent innings. Sean added a quick 19 off 11, before the remaining bats (Asad, Shahab, Iihan, Yasin, and Findlay) added a further 18 runs to reach a score of 199 off their 40 overs.
With only 10 players, there was always going to be a gap somewhere but Richmond kept LSE under pressure, with some tight bowling from the opening pair restricting LSE to 39 for 1 off the first 12.
LSE then started to accelerate, though lost regular wickets, and reached 150 for 5 off 30 – 19 runs ahead of Richmond at that point, but with 2 more wickets down, so it was all to play for. In the end LSE were 8 down when they reached the target 12 balls to spare.
Overall, it was an enjoyable game, with contributions from all the Richmond players. The team spirit was excellent, and standards were kept high in the field with all catches being held. LSE were good opponents and played their cricket with a good attitude and we look forward to hosting them again in the future.
Cricket Week is an important part of the RCC calendar, and this year was no exception. 4 games in 4 days presents and opportunity for lots of club members to play on a great surface at our wonderful home ground, and over the past few years the fixtures have provided the perfect stepping stone for junior players moving into adult cricket. Long may it continue.