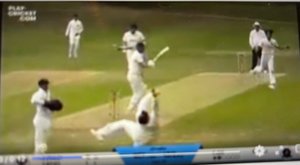 The 1's win their League and Cup matches but there are heavy defeats elsewhere as poor availability and late dropouts hamper Richmond.

An ultimately frustrating weekend as poor availability and too many midweek dropouts saw or lower sides decimated ahead of Saturday's round of league fixtures. The 1's however provided both entertainment and victories, winning both the League match against Hornsey and the Cup match away at Weybridge.
At Old Deer Park on Saturday, it was Jules Sumerauer who again smashed visiting bowling all round the ground. His ton this week was actually quicker (41 balls) than the one against Crouch End. When he was out with the score on 175 for 1, it looked as though Richmond could have been on for a score of 400+ but it was not to be as many aggressive shjots were played and we slipped to 286 for 7. However debutant Vansh Jani and Sam Goodwill put together an excellent 8th wicket partnership of 65 to see us post a total of 362.
Whilst batting Tanmay Thanawalla had been hit on the head and so had to go off for a precautionary scan, leaving Richmond with 10 men at the start of the Hornsey inninings. Step up 13 year old Ethan Human who proceeded to field exceptionally well for the remainder of the Hornsey innings. In truth Richmond's bowlers were not at their best and, whilst we never looked like losing the match, we probably allowed Hornsey to score more than they should have done, finishing on 295 all out.
The 2's, away at Highgate, suffered their 4th straight defeat. We are in need of greater commitment and determination from a group of players who all believe that they should be playing at this level if not higher. Batting first we were restricted to 209/9. 8 batters got into double figures. No one scored 50. On a very small ground, it was always going to be hard to defend that total and sure enough Highgate passed our score in just 35 overs for the loss of 5 wickets.
The 3's took on fellow title chasers Ealing at the Newman and also lost heavily. Batting first we scored 184 all out. In reply Ealing overhauled us for the loss of only 2 wickets.
The 4's, with 6 changes from the team, originally selected also lost badly against Highgate 3's. Dismissed for just 121, we were unable to stop the home side knocking them off for the loss of just 2 wickets.
The 5's, also missing a lot of regular players, were also comfortably beaten by Actonians 3's to suffer their first defeat of the season. The home side posted a score of 241 for 6 and we were bowled out for just 130.
On Sunday, the 1's travelled to Weybridge for the group semi-final of the Royal London Club Knockout. Having been inserted, our innings was dominated by a superb 131 from skipper Will Phillips, backed up by 50 from Tanmay Thanawalla. Their partnership of 148 gave us the platform for a total of 250 off 40 overs. The captain then performed with the ball dismissing Weybridge's star man, South African test player Sarel Erwee for just 9. Kartik Jain then came on to take 2 wuick wickets the first the result of a wonder catch (and now Twitter sensation) at first slip by Adam London. From there, the game was won and the home side never threatened. We go on to play Aston Rowant in the final of Group 11 (the last 32 of the competition) with the match scheduled for Sunday 19th June away.
Meanwhile at Old Deer Park, the Women's 1st XI saw off Ashford by 4 wickets with Kate Frayling the lynchpin of our innings with a match winning 30.
Share via
FacebookTwitter
https://www.richmondcricketclu
Recent news