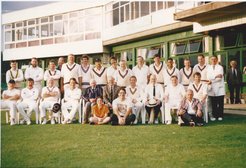 RCC Through the Ages - Farewell to the 20th Century

Chris brings us up to turn of the century

the 90’s .. saw the last truly prestigious Richmond fixture against an international side

Richmond’s 1st XI went into the final decade of the 20th century as Champions of Middlesex. They were to end it relegated from the Premier Division. Whilst this was a disappointing way to end the century, the decade had been a rewarding and successful one from the club as a whole. In the Middlesex League, 6 titles were won across the club’s top 3 sides with the 3rd XI winning 4 of them, the 1’s and 2’s one each. The club also won the Middlesex Cup for the first time in 1997 and enjoyed a number of superb cup campaigns in both the National Knockout and the Evening Standard Challenge Trophy but fell short too often at the semi-final stage.

The 90’s was also a decade of great change in Club cricket as a whole with the introduction of smaller Premier leagues and, most notably, promotion and relegation. With your correspondent one of the primary and active proponents of promotion and relegation, it was a touch ironic that he should become the first Richmond captain to lead a side to relegation, but such is life. It was the right thing to do for many reasons and 20 years on, there cannot be any doubt that it revitalised a league that, by the end of the 20th century, was becoming a little stale.

After a disappointing defence of our title in 1990, the next 4 seasons saw the 1’s enjoy top 5 finishes in each season but, in truth, we could have done that little bit more to win trophies. In 1992, the side reached the semi-finals of both major cup competitions but lost both by a handful of runs. That same season, the 3rd XI won the League. The following year, the 1’s won the same number of league matches as Champions Finchley but lost 4 to Finchley’s none. Teddington, with less wins but 7 winning draws, sneaked into 2nd to leave us in 3rd place.

In 1994, hopes were high, and the side performed well throughout the season. Going into the last Saturday of the season, Richmond was top of the table, unbeaten and 2 points clear of the defending champions. We were at home to Stanmore, Finchley at home to Brondesbury. It was a miserable day, with rain all morning and seemingly set for the day. Angus Fraser was playing for the visiting side, the day after being told that he had not selected for England’s forthcoming tour to Australia. With pressmen milling around and the big man staying out of sight in the dressing room, the umpires were all for calling the game off before news came through that the game at Finchley had begun. Alastair Fraser, Angus’s brother and Stanmore’s captain, agreed to play and the toss was made without the covers being removed. Richmond lost it and were asked to bat. Fraser Senior was in the mood to let off steam and, running in from the Town end with the wind and rain at his back, he bowled 14 of the 19 overs delivered from one end. By the end of Richmond’s innings – 156 for 8 off 39 overs – news had filtered through that Finchley’s match was suspended. Naturally, and rightly, Fraser Junior insisted that our game should continue and his batsmen didn’t disappoint him. In truth we struggled with the wet ball, tempers frayed and we lost by 8 wickets. Meanwhile, Finchley had persuaded Brondesbury to resume. With little time to get a game in, they declared after 19 overs to give themselves a chance of bowling 20 in return thus ensuring that, if they did not lose, they would get 4 points from a winning draw and nick the title. Their gamble paid off and so Richmond failed to win the title in the cruellest of circumstances.

If the 1’s ended the season in disappointing style, the 2’s, under the captaincy of Nick Morrill, did not. Winning 12 out of 13 completed games, their unbeaten summer saw them champions with 2 weeks to spare. The 3’s meanwhile finished 3rd to round off an excellent Middlesex League season for Richmond.

Your correspondent stepped down as captain after 8 largely successful seasons and was replaced by Trevor Brown. 1995 however was a poor season at 1st XI level with a 10th place finish not what we had hoped for. However again the 2’s and 3’s enjoyed excellent seasons although the 2’s were unbeaten throughout the season but were pipped to the title by Ealing. The 3’s went one step better and won the title, an achievement that they were to repeat in 1996. Meanwhile the 4’s won the 1987 Kestours League (a feat that they were to repeat as the decade went on). With record numbers on tour (allowing for 2 teams to be put out on 2 days of the 5) and great strength throughout the club, this was a golden period for Richmond.

Brown stepped away from the captaincy, and the Club, at the end of the 1995 season, after 11 magnificent seasons, and was replaced by 2nd XI captain Nick Morrill. After 2 indifferent League seasons, Morrill’s leadership was rewarded at the end of 1997 with the Middlesex Cup. The following season, the last under the old one League system with a place in the top flight in 1999 only for those clubs who finished in the top 10 places, Morrill was to win again and this time it was the big prize – the League title. It was a curious season. In truth, the 1’s did not play particularly well over the first half of the summer and it was decided to recall Peter Ray, by now in his 63rd year, to the side. His craft, aided by the arrival of Ben Hutton whose batting and almost more importantly his catching, saw the side gather momentum with a series of wins to go into the last game needing only a winning draw to guarantee the League title. This was secured and Richmond ended the ‘old’ league as champions.

The weaknesses of the side however had been masked by performances against the weaker sides in the League and, with the departure of a number of players including Morrill, the 1999 side, led again by your correspondent primarily because no one else was prepared to take it on, struggled in the new world of a 10 side Premier league. After the success of the year before, only 1 game was won and 11 were lost. We were relegated comfortably. The 3’s provided some compensation as they won their 4th title of the decade.

So, the 20th century came to an end. As a club, Richmond had thrived generally and enjoyed success at all levels. Many superb cricketers and club men arrived. There were many exceptional 1st XI players - Paul Bail (older brother of Sprog), Simon Snelling (known these days to most of you as Wolfie), Simon Ferguson, Brian Chambers, Graham Pointer and Warren Symcox. There were also great characters, like Neil ‘Trailer’ Miller, Ian ‘Sid’ Snelling, Phil Burrow and Richard Amos to name just four from many. Another arrival in the 90’s was Richard Barlow, a young enthusiastic student. Early on, Barlow struggled to establish himself in the 1’s, much to his frustration but as a new century approached, and Richmond facing the prospect of Division 2 cricket in 2000, Barlow was the obvious man to step up to the 1st XI captaincy. As the next chapter of our history will recall, this was to be an excellent decision.

Finally, no history of the 90’s would be complete without three further recollections. Firstly, and very sadly, in 1997 Terry Harris, an absolute legend of a Richmond man, passed away whilst still in his Fifties. It could be argued that Terry was Mr Richmond, a club cricketer through and through, who believed passionately in everything that was good and traditional about the club game. His loss was a real kick in the teeth for everyone at Richmond as he had been the club’s central figure for many years.

Earlier in the decade, Harris had played a huge role in the organisation of a series of matches between the club and former players. These took place for 3 years from 1992 to 1994 and were fixtures that brought together the old and new. The matches were hugely competitive but always played in the best of spirits. They were also very social gatherings as one would imagine when old friends meet up to reminisce.

On a completely different note, the 90’s also saw the last truly prestigious Richmond fixture against an international side. In 1991, Sri Lanka, by now a Full Test nation, came to England for one Test match. They toured for just over a month and were given a small number of games by the Test & County Cricket Board (the ECB as was) against county sides. However, when they first arrived in London, two ‘pre-tour’ matches were arranged for them. One was against a team of Sri Lankan expats playing in and around London. The second was against Richmond. It was a memorable game for many reasons which the visitors won by just one wicket at the end of a match of great tension and drama. A future chapter of this history will look at the many international sides who have visited Old Deer Park and will provide more details of this extraordinary match.