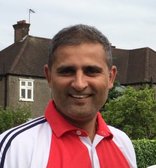 The first in a series of highlights from our recent past: 3 important wins but 2 bad defeats on a day of mixed fortunes and one individual record.

On League Saturday 16, Kshitij Desai became the second Richmond player to record a double-hundred in Middlesex League cricket as he smashed Highgate 2's to all parts to record 211 - a Richmond record for League cricket. His efforts enabled the 2's to record a mammoth 321-9 and record a comfortable 78 run victory. With League leaders Shepherds Bush losing against 3rd placed Ealing , the 2's are now just two points behind in second place.
The 1's poor form continued. At Old Deer Park, Hampstead won the toss and batted. At 33 for 3 and then 71 for 4, it seemed as though we might restrict the visitors to a modest score but a 5th wicket partnership of 105 and subsequent hitting took them to 247 for 7. In reply we needed a good response but with Will Phillips and Adam London adjudged LBW early and some loose shots from other players, we slumped to 45 for 5. Alex Griffiths, on his welcome return to 1st XI cricket since breaking his finger in April, played steady with first Kieran Evans and then Dan Fryer, but Richmond were dismissed for just 116. The loss leaves the defending champions in 7th place, just 1 point above Stanmore and 9 ahead of Finchley. One more win should secure League safety but the side will need to play a lot better than it did yesterday if this is to be achieved.
The 3's also suffered a heavy defeat being dismissed for just 99 by Acton 3's who passed the target for the loss of just 3 wickets. Nevertheless, results elsewhere ensured that the 3's are not in danger of relegation.
The 4's however secured an invaluable win as they attempt to climb out of the bottom two and maintain their position in Division 3. Thanks to 5 for 26 from Hamza Sajawal and 3 for 40 for Joel Clarke, Stanmore 3's were restricted to 198 for 9. In reply, Rich Zotov's 61, supported well by Arjun Bhat's 44, set up a 4 wicket win. The 4's face South Hampstead next week knowing that another win could see them climb above Harrow St Mary's in 8th and level with South Hampstead in 7th.
The 5's enjoyed a very good win over Middlesex Tamils chasing down the hosts 170 for the loss of only two wickets. The victory moves them up to 4th place in the table.
So a mixed weekend which saw poor availability throughout the club with more than a dozen regular players missing. It is hoped that next weekend, Richmond will have full availability for what is looking likely to be a very important Round of League matches.
Share via
FacebookTwitter
https://www.richmondcricketclu
Recent news