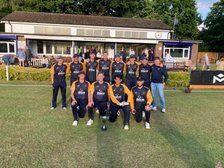 A weekend of contrasting fortunes ended with Richmond being crowned T20 Champions of Middlesex in 2022 and gives us the chance to push on for the national title. Played at Stanmore Common, Richmond first defeated Ealing and then Crouch End to take the title. Against Ealing, Will Phillips won the toss and asked the E Men to bat first. Our bowling was consistent throughout taking wickets at regular intervals after Ealing got off to a fast start. KD led the way with 4 for 22 but all of the bowlers deserve credit. In reply Greg King and Will got us off to a fast start before Lachie Bangs (52 not out) and Adam London saw us home with 3.5 overs to spare. Ealing 129/9, Richmond 130/3.
Crouch End won the toss in the final and invited us to bat. Will's 48, supported by a number of others, carried us to a total of 162/8, a more than decent score. Our reply with the ball could not have started better as we reduced Crouch End to 10 for 3 and then 41 for 5. Some hard hitting gave them a glimmer of hope but once Hassam's innings of 51 off 40 was ended by Alex Woolvine, the match was pretty much done and dusted. Crouch End's skipper tried his best from number 11 but James Nelson picked up the last two wickets and we won by a comfortable 27 runs.
In Bushy Park, the MDL XI secured a winning draw against Teddington with skipper Eddie Bruce top-scoring with 45 after Kyle Seth (5/46) and Will Knowles (3/53) had done the damage with the ball. The draw leaves the MDL side 9 points clear of Teddington at the halfway point of the group stage.
At Old Deer Park, 13 year old Ivreen Dhaliwal's outstanding 118 enabled Richmond to set a formidable target of 259 which Reigate Priory fell well short of being bowled out for 149, Ivreen following up her ton with 2/19. Emily Barker and Simran Choudhary both picked up 3. The win takes the Women to the top of the SWCL.
Saturday was less successful with one win for the 5's, losing draws for the 1's and 3's and defeats for the 2's and 4's. The 1's travelled to Shepherds Bush and invited the hosts to bat first. At various stages (93/4, 221/9), it looked as though we would restrict the Bush to less than their eventual 261 but a stubborn and effecfive last wicket partnership pushed the target to a challenging one.
Greg King was dismissed in the first over of our reply but skipper Will Phillips and the returning Tanmay Thanawalla steadid the ship. However the loss of Phillips on the stroke of tea was a blow, as was the dismissal of last week's centurion Adam London shortly afterwards. When Tanmay, Lachie Bangs and Sam Goodwill all went shortly afterwards, defeat looked on the cards but an excellent and defiant partnership between Will Hunt and Sami Shori gave us hope of the draw. When Will was dismissed 10 overs remained but Matt Dickinson followed his excellent earlier bowling spell of 4 for 37 by digging in and supporting Sami. Whilst he fell with an over to spare, Sami calmly played out the last over and the draw was secured.
The 2's lost 4 wickets for just 7 runs when well set and had to settle for a total of 229, less than might have hoped for. Stanmore's reply was decent but with key wickets taken at key times, a Richmond win was possible with the visitors 8 down and still 20 required. However it was not to be.
The 3's batting also let the side down. Chasing 239 on a good pitch at the Newman Ground, what looked like a strong batting side didn't fire at all and we have to settle for 138 for 7.
The 4's travelled to same ground as the 3's had last week to play Hampstead. Like the previous week, they found themselves on a wholly inadequate and dangerous pitch and could not cope, being dismissed for just 95. The hosts were 11 for 4 but some big hitting saw Hampstead 4's overhaul the small target by 6 wickets.
Meanwhile, the 5's were victorious over Hampstead 5's. Having been informed about a change of venue (from one side of London to the other), Ali Raza's side chased down a target of 225 with 4 wickets in hand, Qaizar Mumtaz and Rashid Mushtaq being the leading scorers.
Share via
FacebookTwitter
https://www.richmondcricketclu
Recent news