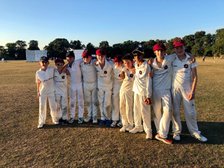 Most normal people think that the cricket season starts at Easter. Cricket parents know better. The season starts in October, with trips to Fordhams and VKS for training stumps and knocking-in mallets, for linseed oil and Incrediballs.

When Easter finally comes, famine turns to feast, with an explosion of Committee Meetings, an incomprehensible spreadsheet listing fixtures in unheard-of, far-flung places, outdoor nets, A-team fixtures, B team fixtures, Borough trials, County trials, club meetings, team meetings, Rules meetings, cancelled fixtures, rearranged fixtures, and, above all, a myriad of emails, a never-ending, raging torrent of emails begging for directions to the game, for players, for lifts and for child-minding, and for Alexander to be given a bat, or a bowl, or medication, or to be allowed to leave after he’s batted because he has a party to go to?

In normal sports, the action comes thick and fast, the games are short, and reflection and sorrow come after the game, not during it. Cricket parents understand the exquisite and protracted torment of watching their child practice his batting for hour after hour in the nets all week, only to fall for a duck in the first over of a game that takes 3 or 4 hours to complete and another two hours to get to and to return from. Yet even that torture is better than the shared disappointment of learning that their child is 10th in the batting order, and that they must look on, padded up and frustrated as “buffet bowling” is dispatched to all parts of the ground.

Which brings us to the Middlesex Cup Finals Day, held in blazing sunshine, on a parched ground at Teddington Cricket club on Sunday 5th of August, 2018, the last day of the Under-11 season. Richmond had had an up-and-down year, winning most games but contriving to lose to neighbours, Kew, and then being thrashed by Teddington, before ending up level with Teddington on points, only to lose the league title on a countback of overall wickets taken The only chance of silverware this year was going to be the Middlesex knock-out Cup.

We arrived at Bushy Park for Finals Day after a series of convincing wins, despite the team being decimated by a series of absences caused by summer holidays. It is, of course, the same for all of the teams, but it sometimes makes for interesting cricket, as County players take the field alongside people’s younger brothers and sisters, pressed into action at the shortest of notice to make up the numbers. In our case, the cruellest absence of all, both Head Coach, Ian Tabor, and his son, our Surrey all-rounder, Thomas, were in Sicily.

We had only eleven players, Lavya and Sam having flown in from the Caribbean that morning. Worse, Lavya was booked on a flight to India from Heathrow at 9 pm, of which more later…

As we pulled into a sweltering car park at Teddington CC, we beheld the ominous spectacle of the first semi-final finishing an hour early. A rampant Teddington team were administering the last rites to the aptly-named Totteridge, who had managed just 77, a score that Teddington rattled off in just 8 overs. Teddington promptly disappeared in high spirits for a two-hour rest in the comfort of their own homes, to prepare for the Final.

Our own semi-final was against the more substantial obstacle of Ealing CC. Fraser won the toss and elected to bowl. Hugo K, who bowled fast and straight all day, struck in the first over, but after that it was tense stuff, with three of the Ealing batsmen scoring 30 and Richmond cycling through their bowlers, Sam, Thomas, Lavya and Jay all going wicketless, but bowling with good control on an arid, straw-coloured pitch. Nikhil and Fraser got late wickets to restrict Ealing to 109-4, which always looked like a below-par scorewhat was an even wicket and a very fast ground. Some very brave and tidy keeping from Will S, and some disciplined bowling kept the extras down to just 22. Half of the job done!

The Richmond reply began in the same way as Ealing’s innings, Thomas falling victim to a very good ball in the first over. Nikhil added a confident 29, and Hugo another 20, before both holed out to catches in the deep, but Fraser’s nerveless 53 left Jack N and Jack M to score just 5 runs in 5 overs. In the event, they eased us home in the 16th over.

At this point, despite the stifling heat, stoked by their win, the boys were in good humour. Teddington returned, looking cool and refreshed, and the usual pleasantries were exchanged. The Richmond team looked in good form despite the prospect of having to play two games in a row in thirty degree heat, and after losing the toss, Richmond were put in to bat at 4.15 pm. This was a blow, we knew that Lavya had to leave to catch his plane at 6 pm and we had hoped to field first.

Undeterred, Jack N. and Hugo opened against a very capable Teddington attack. Jack N. fell for 5, which brought Nikhil to the crease. Both he and Hugo applied themselves well, but they were relentlessly pegged back, with Ealing giving 4 overs each to their top 4 bowlers. Hugo was selflessly run out for 13 by a stunning direct hit when Nikhil called for a quick single, and Nikhil was eventually caught out for 19 off 28 balls.

At the halfway mark, the Richmond total was just 57-2, but another quite brilliant innings from Fraser was already taking shape, and Jack M found the middle of the bat from his first ball, to notch a brisk 29 not out from 24 deliveries.

The pressure eased, the runs came more freely, and Fraser finally completed his second fifty in the last over, to end on 53 not out from 42 balls. Richmond ended their innings with 132-3, a par score that left the contest poised on a knife edge. Worse, we would have to play with only ten fielders. Phone calls were made, and Lavya’s parents heroically delayed his departure for half an hour by packing his bags and bringing his clothes to the ground for him to change into.

Teddington’s innings was as tense and stilted as Richmond’s. Hugo bowled beautifully but went wicketless, four overs for just 14 runs. Lavya bowled two good overs but then departed for Heathrow, with many a backward glance. William W and Jack N again kept things very tight and the first Teddington opener holed out to Sam's second outstanding catch of the day off Jack’s bowling. 35-1. That brought in Teddington’s star batsman, Sahil, and the scoring rate began to climb worryingly. At the ten-over mark, Teddington were on exactly the required run rate, at 66-1 with 9 wickets standing, and a tiring Richmond were down to ten men.

After the drinks interval, Teddington made what looked like being a decisive move, Sahil plundering a series of boundaries from our spinners. Fraser dragged them back a little, trapping the second Ealing opener LBW for 15 in the 14th over, but Sahil was on his way to an excellent 55, and the extras were mounting up. Fraser took a second wicket, another LBW, but Teddington were now relying almost completely on their Surrey batsman going into the last 4 overs and it was clear that they had little batting left below their top 5.

Hugo and Nikhil came back on to bowl at the death, with Teddington needing just 21 off 24 balls. They struck 12 runs off the next 12 balls but lost two wickets (one a fine catch by William W, off Nikhil’s bowling).

5 wickets down, and 9 runs needed off the final 12 deliveries. The Teddington tail-enders looked nervous, but Richmond were also jittery and trying not to give up extras or boundaries. In the 19th over, desperate to get Sahil back on strike, Teddington called for a quick single, not realising that keeper, Will S was poised over the ball. His quick thinking in throwing the ball back to the bowlers’ end saw a despairing, scrambling Sahil caught out of his ground, unable to prevent a calamitous run-out.

6 wickets down, and just 3 runs needed off 6 deliveries.

Richmond brought all their fielders in for Nikhil’s last over.

Cometh the hour, cometh the man. And that man is Nikhil.

Third ball: Wicket (Cue pandemonium, nine wickets down and numbers ten and 11 at the crease)

Fifth ball: Dot ball!! (they think of running but the ball is in Smithy’s gloves)

Last ball: A bye, but Smithy has it in his hands and they cannot run a second!!!!

Richmond think they have won, on a countback of wickets lost.

Teddington think so too.

The Umpires don’t know the League Rules in the event of a tie.

More phone calls are made to the Chairman of the League, the MCC, the umpire’s mother and….