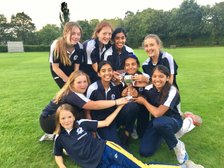 The u13 Girls' team has reached the ECB Finals Day, to be played at Neston CC (Cheshire) on Wed 18th August.

The team started their journey with a confident win against Ealing followed by a second London derby game with Spencer which resulted in a narrow 4 run victory. The next two games were played against Kent teams - Bexley in the third round and a very strong team from The Mote (Maidstone) in the fourth. Once again, the girls batted first and put up defendable scores to win by 69 runs and 13 runs. The South & East regional final against Harrow (probably the first time that two Middlesex teams have met at this stage of the competition) was won by 72 runs.

The draw for the semi-finals sees Richmond play Leyland (Lancashire) and Porthill Park (Staffordshire) play South Wilts. The final and 3/4th play-off will be played after lunch.