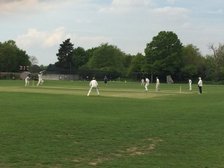 Powerful batting and good bowling takes the points for Richmond

The 2s had the luxury of an opening day home game against visiting Stanmore. Having won the toss on a warm, sunny day skipper Simon Elliott elected to bat. For the first time this season the 2nd XI league is mirroring the Premier League with a watered-down version of the limited overs games book-ending the usual declaration stuff. So, 45 overs a side, fielding restrictions and a maximum 9 overs per bowler awaited the first 5 games (and last 4) of the 2016 season.
Despite the early loss of Paddy Stern, opening batsmen Stephen Bail and the skipper piled on the runs. Elliott, in particular, looking in excellent touch early on with a series of confident cover drives and cut shots. Shortly after the partnership passed the 150 mark, the skipper succumbed lbw attempting to move the score on (via a very dodgy looking reserve sweep attempt, it has to be said) for an excellent 72. Showing their intent to post a big total, big hitting David Blows was promoted to number 4 and supported Bail as he reached yet another superb hundred for Richmond. At this point Sproggy had obviously had enough. Weary, thirsty and in need of rest he ran past the very next ball and was stumped, marching off the pitch in desperate search of nicotine to well-earned applause.
Blowsy continued, hitting a quick 39 before trying one too many and unselfish batting from Matt Dickinson (fresh from his year in the legislative wilderness) and Dan Fryer left Stalker and returning 2nd XI legend Steven Deakin, playing his first competitive game of cricket since 2014 due to injury (and looking fitter than ever before), to finish the innings posting a competitive 291 – 7 off the allotted 45 overs. But not before Deaksy pulled a thigh muscle.
Needing 6.5 runs an over, Stanmore’s batsmen never really got going, losing wickets at regular intervals to finish on 115 all out after 37.3 overs. The typically miserly line and length of Sharif Khan’s wicket to wicket nibblers saw him bowl out his 9 overs for just 28 runs taking 2 wickets. Fellow opening bowler Barnaby Cole, on 2nd XI league debut, saw his hard work over the winter pay off with superb opening game figures of 8 overs 3 for 26 despite the best effort of watching dad Phil (and his camera) to put him off. Two wickets a piece from Deaks (on one leg) and Stalker, supported by some tight bowling from the “rebranded” bowling all-rounder Oli Tame seeing off North West Londoners.
A cracking start to the season with 10 good points, excellent energy in the field and some promising early-season form on display. A trip to old rivals Finchley (who pipped the 2s to the league title in 2014) awaits next week for a side with serious title ambitions.
Share via
FacebookTwitter
https://www.richmondcricketclu
Recent news