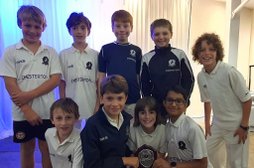 RCC U11Bs had a great win over Worcester Park on a nice, sunny Sunday, most pleasingly brought about by a real team effort with everybody contributing.

We lost the toss and were put in the field but a combination of tight bowling and really sharp fielding ensured Worcester Park were never able to really get going, even with some very short boundaries.

In the 20 overs they faced they managed to score only 35 off the bat. All 10 outfielders bowled and the pick of the bunch was Finn P, who got two wickets in three balls, both satisfyingly clean bowled. There was also a smart caught and bowled by Charlie P, with Ned B claiming the other wicket by destroying the stumps in the final over. Mashood A, James J and Ned B were also very tidy while Oli N's on-the-mark slow-medium also proved tough to get away and was a timely reminder that steady and accurate is usually a lot more useful than fast and erratic.

The less impressive aspect of our bowling performance is told by the extras column - which totalled 64. Only five of those were byes or leg-byes, leaving no less than 59 runs donated through wides and no-balls. Out of a total of 99 that's a pretty shocking figure, so our boys really need to put some time in the nets and in their spare time working on bowling accuracy. Overall though, with such small boundaries, it was a great effort to keep the hosts under 100 and really satisfying that we did it with everyone bowling and most boys getting at least two overs.

Although we lost Jack W to a first-ball duck - and we've all had those and know how it feels - we quickly set about taking control of the match. Archie R revelled in opening the batting and showed great patience and good shot selection to score 18 not out through the 15 overs we needed to knock off the tally. The eye-catching innings of the day though came from Mashood A, who clumped three of his fist five balls for one, four and six. He continued to connect nicely, including one massive six over mid-wicket, before holing out for 27 to a good catch at square leg. Finn P came in to continue the assault, also sweeping two of the first three deliveries he received for four and also clearing the ropes en route to a quickfire 16. Alex S and Charlie P came in and kept the scoreboard ticking with excellent running between the wickets - which was a really pleasing aspect of our entire innings, with Alex unlucky to be run out by their birthday boy who hit one stump with a sharp throw.

The 100 target was reached for the loss of three wickets in the 15th over for a dominating victory but we agreed with Worcester Park that they would bowl out their overs, which gave us a chance to get everyone in to bat in for at least a few balls, with Archie R retiring unbeaten on 18.