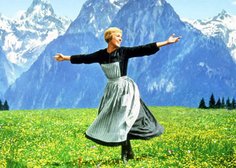 Richmond Hill was alive with the sound of....

Much as we like playing at doe a deer an old deer park, today's first home game was played at our second home but unlike Wednesday with more than the occasional ray a drop of golden sun.

Princess Amanda our expert scorer awoke at 4am to prepare our captain's younger sister for her reprise of Julie Andrews in a film where she starts out as a nun. Despite the early start at Bates mansions both Mum and son played their respective roles to perfection – in Amanda’s case even “holding the hand” of her fellow scorer according to his grateful post-match email. Such goings on beyond the boundary rope certainly escaped my eye.

Thoughts of nuns were not far from the player's minds either once Fred had produced the wittiest sledge since last year's classic "more edges than a dodecahedron" with "they're as nervous as a bunch of short nuns at a penguin shoot".

And they were right to be nervous. After an incredible batting performance the Royals were left with less of a hill and more of a mountain to climb.

It wasn’t all plain sailing though. We lost the toss (again) and were put into bat (again). Unlike last week our openers chalked up some runs but we were once again in a spot of bother once we’d offered two fairly straightforward chances to the Royals. Tanuj was opening the batting strongly – he’s a player who doesn’t seem interested in easy singles – a bit Goweresque - he simply waited for a wide ball and then cracked it through the off side. His innings closed on 20 missing a straight one. This brought Lachlan and James together who quite simply took the game away from the Royals. Lachlan was into the thirties but then made the fatal mistake of asking how close he was to retiring ...fate then took over. James was nearing his second consecutive retirement and duly obliged – pushing his average to infinity and beyond. The tail was not given a chance to wag as both Fred and Mac kept up the fine work including one shot which Mac played unquestionably hard and off the middle that pierced the eardrums of all those on the nearby allotments who downed tools and were last seen running for their lives up Richmond Hill. We closed on 169 for 4 which eclipsed by 18 runs our record breaking score of the week before. Not everyone batted despite the coach’s best efforts and those that didn’t, including Evan who played a cameo role to perfection, will be favoured in their next outing.

Our efforts in the field were a step above. I am not going to dwell on a much reduced extras count (half the total of the previous week); sharp fielding and clever in/out field setting when HWR were batting with a strong/not so strong pair. Careful observers would even have noticed Lachlan moving the fielders deep to the last ball of the over to the weaker batsman hoping to give him a single and leave him on strike for the next over. Are these lads really only 12 or 13???

The Royals closed on 128 for 4 and we had chalked up what to my mind was the most impressive victory I’ve witnessed these lads produce in the three years it’s been the honour for me (a name I call myself) to be their coach.