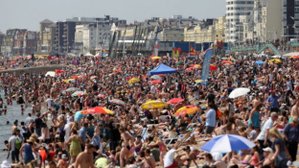 Phew What a Scorcher

At Richmond CC we never, repeat never, bear a grudge.

On 5 June 2016, Epsom CC U12s announced, once Richmond CC u12s were in the field, that batsmen could not be dismissed via “Leg Before Wicket”. This was clearly a local rule and not one sanctioned by the West Surrey Youth Cricket League let alone the MCC responsible for such matters. Post match head shaking could not alter the result and the two clear LBW appeals by the Richmond bowlers came to nothing under “Epsom Laws”. The Richmond players vowed to right this wrong. Coach Neil consigned the matter to history and never gave the matter another moment’s thought.

A year on and as the mercury strained towards 30 degrees the Richmond u13s assembled underneath the shade offered by a recently planted shrub. The Epsom players headed towards the nearby allotments (do all our grounds have nearby allotments?) seeking the shade of the only large tree that KGF has to offer – all the others presumably shot down by the local rifle club who provide a noisy backdrop to all our KGF fixtures.

A Saturday evening cry off led to panic stricken texts and emails and ultimately a late call up for Osian Jones, a prodigious medium-fast bowler who is now 7 years old. Richmond stacked full of runs opted to bat first.

Leo and Fred took to the crease, mopping their brows as they went. They did what openers do best – kept out the straight ones, pinched runs offered by the opposition and generally kept the scoreboard ticking over – that is the scoreboard which was placed next to our scorer Jez on the outskirts of Kingston, only just visible to the naked eye. The Epsom bowling was accurate but extras were coming thick and fast. The openers decided it was time to speed up and before long both were dismissed but Fred had scored 15 and Leo 25. Joe and Ben upped the ante still further and a record score was on the cards as both went on the attack. We’ve worked hard on ensuring that players always deploy the long barrier to prevent 4s slipping through so it was somewhat surprising to see Steve O’Pray making absolutely no attempt whatsoever to get low and wide to prevent a ball hit hard and low by Joe from sailing across Ham Street and into our newly discovered KGF facilities which actually include a sauna, hot tub and whirlpool bath. Steve left with his tail between his legs and went shopping.

Joe was retired as required on 30 leaving Ben, James, Matthew, Tanuj and Jack to take us to our highest ever 20 over total of 152 for 5.

Jez our diligent scorer alighted a 65 bus from his scorers position and soon appeared in the Richmond CC huddle with news that the Epsom Salts reckoned themselves to be a better batting than bowling side. Fortunately Coach Neil ensured the boys took the field reminding them that we believe them to be the strongest B team bowlers in the whole of Middlesex, Surrey and many other nearby counties. The early Epsom batters did indeed seem strong but before long Mac and Jack (is this a match report or poetry) dismissed the dangermen. Jack made a strong bid for man of the match by following up his caught and bowled with yet another and also worked tirelessly in the field – an example to all his teammates. There were further wickets for Baxter, Fred and Osian but man of the match had to go to Osian not least because of his maiden over at the death and the only maiden bowled throughout the match.

Epsom closed on exactly 100 runs and Richmond moved to the top of the table.