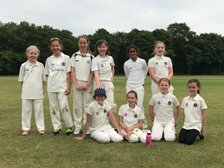 Our first victory of the season!

And a lovely sunny morning.

The girls u12 team travelled down to Whiteley Village, a delightful venue
for cricket with nice hosts, sunny weather and great cricket which
resulted in the first victory for the girls this season.

WVCC won the toss and decided to field. Flossie and Libby opened and
batted sensibly for 31-0 after four untroubled overs. Next in were
Maggie and Laila who defended well and put on a further 15 without
losing a wicket. Poppy and Zoe then added 28-1, with the help of some
wayward bowling. Heidi and Emily were each bowled off the first balls
they faced, but showed great determination and aggressive running to
reach 23 without further loss. Finally Issie and Charlotte came to the
wicket and after playing themselves in for a couple of overs, hit 7
boundaries to finish 44-1. The team score of 155-4 was the highest of
the season so far, with the wickets lost the lowest.

After a quick break for orange juice and biscuits, Flossie opened the
bowling, fast and straight to finish with 8-1. Next up were Libby and
Issie who bowled tidily. Poppy and Maggie each claimed a wicked. Emily,
Zoe and Heidi all contributed and Laila bowled a good couple of overs.
The highlight was the fielding with 4 run outs (inc. 2 direct hits),
which summed up a great team performance as WVCC were restricted to 140-7.