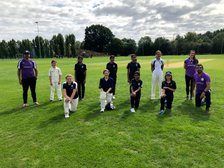 Our second U12 match - away against TD

highest score of the season so far!

Having lost the toss we made a great start to the day making a score of 274 - our highest if the season to date by a distance. This was helped hugely by a cracking innings from Poppy Sykes who had several of the boys looking rather shocked with the ferocity of her shots and by a much improved performance in the running of every girl present as we took many more of the runs on offer than previously. We did however lose a few too many wickets with a couple of over enthusiastic runs and by trying to smash a couple of straight ones.

In the field we defended gamely with several great bowling displays as Heidi, Estelle and Katie all made their debuts for the u12'a and 2 direct hits to gain run outs from Giovanna. Unfortunately at times we struggled to get the ball the full 19yds without bouncing 3 times and resulting in no balls which, ultimately proved our undoing.

In the end we lost a close game by just 8 runs but more importantly learnt a huge amount and made great strides forwards.