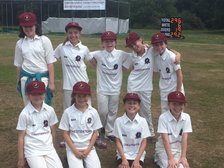 Secondly, what a match - a thrilling 4 run win for the Richmond Girls that will live long in the memory and to which every player contributed. We began with the presentation of the baggy maroons to those who have played three matches and the girls looked resplendent in their 2017 tops and caps (some might say like a cricket team in fact).

With Chloe having won the toss we chose to field first and, the parents on the boundary were immediately impressed with our bowling as Giovanna opened up and was followed closely by Orla. We bowled tightly, giving only 13 wides and no-balls across the innings which was a vast improvement on previous matches and had a great cameo from Isabella's brother look who stepped in to fill a gap and played excellently. As ever Lola performed admirably behind the stumps and we saw some great close fielding including a catch from Emily while Isabella and Maggie also plugged away with their usual accuracy. However, with some big hitting the likes of which we haven't faced before Ripley put on 20 or 30 in their last few overs taking their score to 294 a total we hadn't yet reached this season.

Following a steady start with the bat we enjoyed a couple of big partnerships in the middle of the innings as Giovanna and Lola followed by Chloe and Orla set about the total. Infact, by the time our final pair of Poppy and Evie came into bat the scores were level and they quickly took us to a commanding 12 run lead. Unfortunately we don't make it easy for ourselves and the same lad who had carted us round the park at the end of the Ripley innings quickly took 2 wickets in the penultimate over to leave us teetering with only a 4 run lead. In a match that went right to the last ball, Evie and Poppy however, managed to block out for the draw and see us home for our second victory of the league season - their smiles are very well justified and were matched by the parents behind the cameras.

One final point worth us all dwelling on as a team is Ripley in fact scored 8 more runs than us in total and scored about 15 more than us off the bat (ie without taking wides no-balls and byes into account). The difference was we lost 2 less wickets and gave away less runs in wides. Worth dwelling on for a moment as we bask in our success before our next game.

Apologies to anyone i've missed off the write up as I don't have the scoresheet to hand. All the girls were absolutely fantastic.