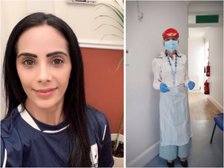 Who We Are - Sonia Gandhi

Once this is over, I’m certain that we will all emerge kinder, compassionate and more resilient
Sonia Gandhi - ECB Level 2 Coach

Sonia Gandhi has entered an elite group. As of last year she became one of just 31 women with an ECB Level 2 children’s coaching badge in England and Wales. She is likely the only Level 2 coach - male or female - who fits that around her work as a GP while being a mother of two cricket-mad kids. No wonder she says multitasking is her superpower.

As usual, she has the children to blame. Inspired by India’s World Cup win in 2011, eldest son Arjun joined the club aged five. Younger son Roshan followed a few years later and the boys are now rarely away from Old Deer Park, devouring the full menu of summer camps, winter nets and one-to-ones. With husband Paul helping to coach Arjun’s side, Sonia soon found herself mucking in with Roshan’s team and, spurred on by the club, the coaching badges quickly followed.

In 2019 Sonia embarked on her Level 2 coaching course at the Middlesex Indoor Cricket School in Finchley. Of 25 candidates, she was the only woman. ‘I vividly remember turning up to the first session and feeling overwhelmed,’ she says. ‘But everyone on the course was really supportive and passing was a great achievement, knowing that I was adding to that tally of female coaches. It would be great to see more.’

For now, the helmets and pads remain in storage as Sonia dons protective gear of a different kind: face shields made and donated by staff at King’s House School in Richmond. Her surgery is now eerily quiet with most consultations conducted remotely. It does not knowingly treat Covid-19 patients, but everyone who enters the building is a potential carrier and Sonia says inadequate PPE and testing remain a concern. Meanwhile Paul, a research doctor, is working on pharmaceutical projects in the fight against the virus.

But the Gandhis will always need their cricket. ‘During these strange times we have all come to realise the value of community, and Richmond Cricket Club is just that,’ Sonia says. ‘It needs all our support so it is there for our children when things get better. Once this is over, I’m certain that we will all emerge kinder, compassionate and more resilient.’