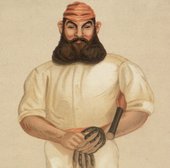 Chapter 3 in the series about the history of RCC, written by Club Chairman Chris Goldie

As Richmond became firmly established as a cricket club with an ever-strengthening fixture list and a growing reputation, it was recognised that the grounds could be used for a wider range of sports.

The following season – 1895 - saw the arrival of two clubs, Old Merchant Taylors and Rosslyn Park. They co-existed until the early 1920’s when OMT’s set up a new home at Udney Park Road in Teddington (ironically Richmond’s 2nd ground before our move to the Newman at Christ’s in 2016). Rosslyn Park however remained until 1956 when they moved to their current ground on Roehampton Lane. In 1957, London Welsh arrived and the Old Deer Park Partnership was formed.

Rugby was not the only winter sport to be played at Old Deer Park as, on 7th November 1874, Richmond Hockey Club played its first match (against Teddington) at Old Deer Park. With Richmond very much a leading light of Hockey, Old Deer Park became a prestigious venue for various leading matches including representative fixtures and the Varsity Match. In 1899, England played Ireland at Old Deer Park in front of more than 3,000 people! Like Rosslyn Park, Richmond Hockey Club was a tenant of the Cricket Club, playing their matches on two sides of the cricket square (East and South), before moving to Chiswick in 2001.

The Richmond Cricket Club also encouraged other summer sports and events. In 1867, the Club staged its first athletics meeting and in April 1869, the Morning Post reported on the third of these annual two-day events as being staged ‘in the fine and extensive Old Deer Park‘. The event featured some races solely for members of the Club but also some open events. One entrant in the Open Hurdles on Day 1 was a certain W.G. Grace of London Athletics Club, who at that time was awaiting his membership of MCC. The race itself was what we would now consider a steeplechase. Grace was leading until he ‘rather stumbled at it” (the 4th) and ‘then went right into the muddy water – right into the middle of it”. Grace was to finish second after his fall. Despite persistent rain over both days, the Morning Post declared the event to be a great success.

Grace was to return to play cricket at Old Deer Park, just once, turning out for 12 of Richmond against 16 of Richmond and District in 1875. The visitors batted first and amassed 391, Grace taking 10 of the 12 wickets to fall. However, he was less successful when he batted being run out for just 7. Two further wickets fell and the day ended with Richmond on 11 for 3. Whether this was because time was up or more simply because no-one cared once Cricket’s first superstar was out is a mystery that will never be solved.

A few years later demand for more summer sports within the Richmond Club saw the formation of the Croquet and Archery Club in 1873, with the croquet lawn established where the grass nets now reside. An attempt was also made to lay down a lawn tennis court. After some wrangling, permission was given by the Crown not only for a tennis court but also for a skating rink!

Both projects were unsuccessful. The skating rink was never developed and the Lawn Tennis Committee was advised to cease playing “as their activities were injurious to the ground!”. However, a few years later, it was agreed, although apparently with some reluctance, that Lawn Tennis could be played and so Richmond Lawn Tennis Club was formed in 1878.

And so Richmond, as we know it now, came into being with cricket, tennis and archery established. In 1902, there was a proposal to introduce polo to the ground but this came to nothing. There is however one further footnote to this tale of multi-sports at Old Deer Park. In 1913, the first women’s international Lacrosse matches were played on the ground with England beating both Wales and Scotland in front of a crowd of around 100 (almost all women) spectators!