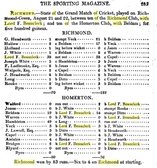 For the first time in 158 years, the cricketers of Richmond are unable to enjoy the simple pleasures that our great game has to offer. During both World Wars of the 20th century, the club continued to play but, at the time when we should all be looking forward to another great summer of cricket, we find ourselves unable even to get down to Old Deer Park to have a net. Strange and frustrating times for all of us.

As we all search for things to do, it seems like an appropriate time to look back on the long and illustrious history of our great club through a series of articles which will trace the origins of the club back to the 17th century, through the Victorian era and into the 20th Century.

Along the way we will reflect on some of the great characters that have graced our club, recall some outstanding seasons, matches and performances that have shaped Richmond into what it is today.

So where did it all start?

On the 29th May 1666, Sir Robert Paston, then a Member of Parliament and later the Earl of Yarmouth, wrote to his wife that : “This day the bells proclaim the King’s birth, and great preparation for jollity everywhere. I am going to Court to visit their Majesties, and therefore take the opportunity of the moment to write to you, not knowing if I shall get home by the post hour…..Post now comes in the Squire of the Body who says he saw your son very well engaged in a game of criquett on Richmond Green…”

This is the first known reference to cricket being played on Richmond Green, at that time and for almost the next two centuries, the only known cricket ground in the town of Richmond. As the popularity of the game grew, particularly in the South of England, it was the Duke of Richmond who became one of the game’s first great patrons in the first half of the 18th century. In 1731, he led 10 men of Essex against 10 men of Richmond. A large crowd gathered, bets were placed and the game came to a premature end, with Richmond just a few runs short of victory, as the Duke’s side had to leave for their long journey home! Pandemonium reportedly ensued as the unhappy crowd, many of whom had placed a bet on victory for the home side, vented their fury on the Essex players as the bookmakers slipped away from the Green!

From that date, there are various references not only to matches on Richmond Green with a London XI playing various teams of Gentlemen from not only Richmond but also Molesey, Kingston and Esher. Then like now, cricket was a game with many different formats. In 1767, King George III and Queen Charlotte, accompanied by many of the nobility, attended a match between 5 men of Brentford and 5 men of Richmond. Fog’s Weekly Journal reported that “His Majesty was graciously pleased to order a dinner for the players at The Feathers in Richmond and gave a guinea a piece to the winners and half a guinea to the losers”

Such limited wickets games were very popular in the late 18th century and the three White brothers of Brentford – Jacob, Joseph and John – were renowned for playing 3-a-side matches. In 1793, they were defeated by three from London, scoring 33 in their two innings to their opponents’ 42. Seven years later, Jacob and Joseph made up a Richmond trio who defeated Ditton in a thriller : Ditton 2 and 17, Richmond 6 and 14 for 2!

It was in the 18th century that there are the earliest references to a Richmond Club. Reputedly in 1740, a poet and man of the Theatre, James Love, dedicated a poem to ‘the Members of the Cricket Club at Richmond in Surrey” whilst in 1798, there is a record of the Richmond Club wearing narrow gold-laced hats and white jackets and drawers.

In 1805, the Sporting Magazine, reported on a 2 day match, played on Richmond Green on 21st and 22nd August, between 10 men of the Richmond Club and 10 of the Homerton Club. Both sides were allowed one guest player. The Reverend Lord Frederick Beauclerk, who a few weeks earlier had scored a century for 12 of All England at Lord’s against 12 of Surrey, was Richmond’s guest. ‘Silver Billy” Beldham, described as ‘safer than the bank yet a most brilliant hitter” was Homerton’s. The match is notable for many reasons not least as the Magazine provided a full scorecard. Worth noting perhaps that the starting odds – 6/4 on a Richmond win – are given as an indication of how, in those days, cricket was a popular game for betting.

It is now accepted that this Richmond Club did not constitute what we would now regard as a cricket club. These did not come into existence until the mid-19th century, when they were organised by young men who wished to extend the team sports structure they had enjoyed at their public schools and universities.

In Richmond’s case, this happened in 1862 and in our next instalment we will describe how Richmond Cricket Club was born and grew through the latter half of the 19th century.