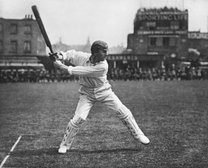 In 1883, Richmond Cricket Club celebrated its 21st Anniversary and celebrated in some style. The MCC, by now firmly established as the world’s leading cricket club, came to Old Deer Park, there was a concert at the Castle Hotel and a gala Dinner at the Star and Garter. It was also a pretty successful season on the field. 42 matches were played of which 33 were won. 5 were won and only 4 lost.

The following year saw another startling innovation as ladies were accepted as members of the Club for the first time.

By this time Richmond had a fixture list to be proud of including matches against both Middlesex and Surrey. A number of county cricketers also played regularly for Richmond including Billy Williams, later the founder of Twickenham Rugby Stadium but then a Middlesex cricketer, and the Beldam Brothers, George and Cyril.

George of course was better known as the pioneer of sports action photography, with his early 20th century photographs of Victor Trumper, amongst others, iconic images of the game. In 1991, when Richmond celebrated 325 years of cricket in Richmond, Beldam’s son was in attendance, 97 years after his father’s first season at Richmond. Beldam himself was also a Scratch Golfer, who reputedly had a hand in the design of Richmond Golf Club in the 1890’s, and also played football for Brentford!

The earliest season recorded with averages was 1878. These are kept in a magnificent Book which is a never-ending source of facts and historical interest. The 1914 averages record that the great Hampshire and England batsman, Philip Mead, played as a guest against the Thespids, scoring an unbeaten 100.

The late 19th Century saw Richmond dominated off the field by a gentleman named Walter Furze. The Club’s President, Furze, was something of an autocrat by all accounts but also a generous one, making himself responsible for the Club’s debts each year and settling them out of his own pocket.

It was Furze who was indirectly responsible for the advancement of the man who, probably more than any other, was Mr Richmond – George Lindsay-Holt. His association with Richmond spanned 69 years but it all began in 1895 when, as a 15 year old schoolboy, Lindsay-Holt was drafted in at the last minute to play against the touring West Indians in a two-day match. As President, Furze insisted that whoever came into the side to fill the outstanding place, had to be a member. Lindsay-Holt, although still a school-boy, was and so Furze allowed him to play. He was not to be disappointed as the youngster took a spectacular one-handed catch in front of the pavilion much to the crowd’s delight!

A few years later, Furze died after being thrown from his horse and it as Lindsay-Holt who assumed many of the administrative responsibilities for the Club. Given his position as the club’s financial safety net, Furze’s untimely demise plunged Richmond into crisis. An emergency meeting was called “to consider the future of the Richmond Cricket Club”. Lindsay-Holt left the meeting as the Club’s newly elected Treasurer and Secretary of the Ground and from that moment on he served Richmond by any means within his power. He was President and later Life Patron. When he died, in 1964, he left the Club £2,000 (the equivalent of around £40,000 today). An appeal was launched to raise funding for new gates at the main entrance to the ground in his memory. Those gates survive to this day.

By 1914, Richmond was once again a vibrant club. 47 matches were played over that summer but across Europe, increasing unrest was spreading. In August Britain declared war on Germany and World War I had begun. Richmond’s cricketers played on for the remainder of the summer but for a few these matches were to be their last.