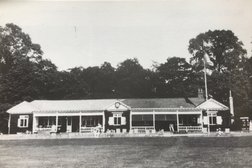 The years between the two World Wars are generally considered to have the Club’s first ‘Golden Age’ – with a healthy membership, strong sides and a reputation as one of London’s finest cricket clubs.

By 1931, Richmond was playing 140 matches in the season, with 3 regular sides on Saturdays and Sundays and a host of midweek matches. The principle of Whole Day and Half Day sides had been established based around both ability and availability and all sides were dominated by men who have gone on to be legends of the club.

A number of Richmond cricketers played first-class cricket in the 20’s but the most illustrious was undoubtedly Stan Squires. His one season for Richmond was 1928, as a 19 year old. The club’s averages show that he scored 1024 runs from 29 innings without recording a century (99 was his highest score) and took 38 wickets at an average of 21. He made his Surrey debut in August that season at Lord’s against Middlesex and over the next 21 years he was to play 408 matches for the county. Throughout the 30’s he was an ever-present in the side, returning after World War 2 to finish his career in 1949. His final first-class match was for the South v the North at the Hawker Ground in Kingston (a ground used by Richmond for 3rd and 4th XI matches in the 1990s). Squires’ career record was more than respectable – over 19000 first-class runs and 300 wickets. Just over 3 months after his final game, Squires had died of leukaemia. He was just 40 years old. Poignantly, Cricinfo shows his place of death as Old Deer Park , Richmond – not our ground, but in the hospital on Kew Foot Road, now being converted into residences.

The 30’s saw a new guard take over the Whole Day XI. although there were some who played on from Gray’s exceptional sides. Joe O’Gorman was one who made his debut in the 20’s and played throughout the 30’s. Joe and his brother Dave, who also played for Richmond, were music hall celebrities of the era (http://ogormanbros.co.uk) but Joe was also an excellent cricketers good enough to have played for Surrey as a wily leg-spinner. His Richmond career spanned more than 30 years, despite interruptions when his work took him around the world, and his son, Frank, was later to become Richmond’s regular wicket-keeper for more than a decade. His grandson Tim, who never played for Richmond, went on to have a successful career with Derbyshire.

Whilst observers of the day would suggest that the team of the 1920’s was stronger, the leadership of Captain T.E.W. Brinckmann from 1932 saw another strong side take shape. In 1937, Richmond's captain inherited the family baronetcy to become Sir Theodore Brinckmann Bart. Under his leadership, and not least thanks to his wealth, Richmond became known as very much of a ‘grand’ club. It was said that Brinckmann paid a member of the ground staff an extra £2 per annum to carry his bags from the gates to the pavilion and that salmon from one of estates in Scotland was often served at lunch for ‘special’ matches. In 1937 Brinckmann captained an MCC side which toured Argentina and included such greats as Bob Wyatt, Maurice Tate and Andrew Sandham. The matches played on this tour were the last first-class cricket matches to have been played in South America. In 2020, Richmond’s current captain, Will Phillips, and club stalwart, Matthew Dickinson, were in the MCC party that toured Argentina, a nice link to Richmond’s past.

Brinckmann brought several exceptional players to the club – Arthur Childs-Clarke who played for Middlesex in the 30’s and captained Northamptonshire in 1947 and 1948; Peter Murray-Willis, who captain Northamptonshire in 1946, and Pat Vaulkhard, who played for Nottinghamshire in 1934 and captained Derbyshire in 1950. Another player of the time was Charles Cox, whose grandson Rupert was a member of the first Richmond side to win the Middlesex League in 1989 and also scored a county championship hundred for Hampshire in only his second first-class match in 1990.

As 1939 arrived Richmond was a pre-eminent club both on and off the field but World War 2 was to bring an end to this first golden age. But, despite the outbreak of war, Richmond endured and after the war, it continued its growth.

For images of Richmond cricket in the 1920’s and 30’s please see the Album – The Golden Age in our website gallery.

With junior cricket thriving and the recent double winning success of our 1st XI, RCC is in another golden age. Whilst the initial response to our Appeal has been outstanding (£30k of our £50k target) donations have understandably slowed. To ensure that the club emerges from Covid-19 fit and strong please consider making a donation here.