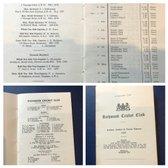 If the period immediately after WW2 can be considered as a time of revival and rebuilding, the 50’s was a decade of great change for both Richmond as a cricket club and Old Deer Park as a sports ground. As the decade went on, with the club approached its centenary, a new generation of young Richmond cricketers began to establish themselves replacing those who had been the heart and soul of the club for so many years.

Men like Harry Duff, whose Richmond career began before the outbreak of World War 1 and lasted for 43 seasons, and Joe O’Gorman finally retired and, in their place, youngsters began to emerge who would serve Richmond for many years to come.

1951 saw the debut of a young trainee solicitor, Basil McKiernan, a batsman who was to play for 25 seasons. The following season, a seamer called Tony Homewood arrived, taking 76 wickets in his first season at the club, and going on to be the mainstay of the Whole Day’s attack until 1973. In 1954, Francis Neate Junior, aged just 14, played 30 times for the club, beginning a Richmond career that was to see him play until 1979. 4 years later, as an 18 year old, Neate made his debut for Berkshire beginning an association that lasts to this day as he is now the County’s President. Neate also became the first home-grown Richmond cricketer to become an Oxford Blue.

Laurie Champniss was another fine cricketer to join Richmond in the 1950’s. A skillful leg-spinner with a devastating googly, Champniss also played a lot of Minor Counties cricket, for Buckinghamshire and also toured East Africa with the MCC in 1973/74.

Later in the decade, other club stalwarts were to arrive. Derek Hunkin, a school friend of Neate’s at St Paul’s, joined Richmond in 1958 and went straight into the Whole Day XI. A humourous man, Derek went on to be Chairman of the Club and a much admired and unselfish captain of Half Day sides, renowned for ensuring that everyone ‘got a game’ in every match. In 1959, Eric Waight joined the club, initially as a seamer but in later years an off-spinner who was to take 1317 wickets at an average of 15.38 over 17 seasons.

The 50’s also heralded possibly the longest uninterrupted captaincy reign in the history of the club. Joe Hodgson was by all accounts a pretty ordinary player but he captained Richmond Extra Half-Day XI for a record 14 years from 1951 to 1964, a feat unlikely ever to be repeated.

As well as being a decade which would see the establishment of many cricketers who would remain associated with the club through until the 21st century, the 50’s also saw the arrival of London Welsh and the formation of the Old Deer Park Partnership. In 1956, Rosslyn Park had the opportunity to secure their own ground and so off they went. Formed in 1885, London Welsh had had a number of homes around London before settling at Old Deer Park in 1957. Their arrival injected enthusiasm and money into Old Deer Park and, unlike Rosslyn Park, who had always been tenants, London Welsh joined as equal partners, through a carefully worded partnership agreement fair to both strictly amateur clubs. Within a decade of their arrival, the rugby club entered its greatest ever era with large crowds and possibly the best club side in world rugby filling Old Deer Park throughout the winter. During this first decade, there were major capital improvements on the ground, largely to accommodate the winter crowds, first the rugby stand and then the clubhouse.

By the end of the decade, Richmond remained as one of London’s leading clubs. The fixture card for 1959 shows that from Saturday 2nd May to Sunday 13th September (20 weeks) Richmond fielded 3 XI’s on both days of every weekend. The Whole Day XI was exactly that – all bar two matches were traditional all-day games. Then, as now, Richmond welcomed both the MCC and the Stage during Cricket Week and matches were played until the very end of September.

As the 60’s arrived Richmond was in good health and had much to look forward to.

We do still need to raise money and you can find the latest on our Appeal here. If you wish to donate please click here.