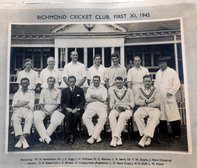 The minutes of a committee meeting in February of 1915 expressed regret at the loss of Mr John Hales in the war and records the following: “Owing to the fact that about 75% of the men were serving in His Majesty’s Forces, it was decided to postpone the annual general meeting until such time when it was hoped that they could attend”. Sadly, many never could. Not until February of 1920 was the next committee meeting held. A little cricket was played during the Great War but no records kept.

During the Second World War, the club decided to try and keep cricket going and teams were fielded most Saturday and Sundays, thus giving great pleasure to servicemen on leave and war-weary civilians. Dr Higgs and Leslie Sears usually captained, mostly against local sides because of travelling difficulties. The biggest games were those for the benefit of the Red Cross and fixture against the British Empire XI. George Lindsay-Holt remained at the helm and even managed to persuade the Royal Artillery, who mounted a searchlight post on the ground, not to put their guns on the square! The pavilion was slightly damaged during the air raids but the real losses were, of course, human ones. There used to be a memorial at Old Deer Park, listing members who had lost their lives in both wars but this was sadly lost when the current pavilion was built in 1969. However, we know that amongst those who perished were Peter Jones, Tommy Redfern, Keith Scott, Angus Macrae, henry Kelly, Tommy McKenzie and Ken Hoad, all lost on active service. Another casualty was Paul Brooks, a hugely talented youngster who, whilst a member of the groundstaff at Lord’s have received national publicity as ‘the boy who bowled Bradman’ during a net session at Lord’s in 1938.

After VE day, slowly but surely members returned, some from Prisoner of War camps in Europe and the Fast East, others recovering from wounds and all just relieved that it was all over.

The 1945 team photo taken shortly after VE Day shows how the side had adapted during the War – a mix of youth and experience as those in the best years were away serving the nation. We thank them and remember them all.