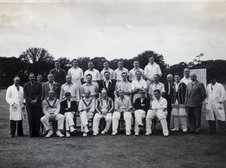 The period after the Second World War is arguably the most important in the club’s history. Along with all other sports facilities on the Old Deer Park, a 71-year lease was secured from the Crown Estate at extremely favourable terms. The Club’s members agreed a new constitution, giving greater autonomy to the three constituent sections - Cricket, Tennis and Archery – whilst remaining one club, and players started to return.

Initially there was a sense of great joy and relief as old faces reappeared, some from prisoner of war camps, others recuperating from wounds and most just glad to be alive after 6 years of global conflict. Of course, some never returned. But despite the sadness of lost team-mates, there was a renewed sense of optimism, and Richmond’s cricketers were determined to enjoy the ability to play cricket once again. Club spirit reached a new high and the relationship between all sections of the club – in particular the cricket and tennis – was stronger than ever. Indeed, in the course of a two year period after the War, 5 cricketers were to meet their future wives, all members of the Tennis Club.

The playing strength was boosted by the emergence of a few talented youngsters and the arrival from Chiswick Park CC, which had been disbanded, of several high-quality players, not least Rex Yeatman, who played a handful of games for Surrey. Yeatman was of the generation who played little cricket for a significant proportion of their 20’s because of the war. Whilst Yeatman was a talented player, the man who was regarded as Richmond’s best batsman immediately after the war was Bob Humphries, who had arrived at Richmond from the West Indies in 1939, before spending most of the war as a Prisoner of War in a Japanese Camp. A flamboyant batsman and exceptional cover point fielder, Humphries was clearly a talented sportsman, once beating the Tennis Club’s singles champion, Geoffrey Bean in a 5-set tennis match. After the 1949 season, Humphries returned to the Caribbean, never to be heard from again.

The post-war years also saw the emergence of 4 cricketers who, in their respective ways, were to become major influences on the decades that followed. Derek Pearson had first played in 1936 and was to continue his playing career for another 40 years, before taking up umpiring for at least another 15 seasons. His father had been a Richmond Member, but more as a Tennis player as he was often overlooked by the selectors, and Derek was a witness to much of the ‘golden age’ as a child. Having played for a few years before the war, by 1945, he was a 1st XI stalwart and in 1946 he was joined by another Richmond legend, Tony Gibbons. Gibbons who passed away in 2019 well into his 90’s, was a regular 1st XI cricketer, who went on to serve the club as Chairman, Treasurer and finally President.

1948 saw the arrival of Francis Neate (later to be known as Francis Neate Senior) and so began the involvement of a family whose influence over the club was to continue through to the mid-80’s. In his youth, Neate had been something of a tearaway fast bowler for Oxford University and Berkshire. The War interrupted his career and by the time he reached Old Deer Park, he was a steady medium-pacer. A grey beard aged him well beyond his years and allied to his stentorian voice, he became an authoritative figure at the Club. In the late 50’s he captained the Whole Day XI for a number of seasons and he was Chairman for much of the 70’s. In 1972, as Sunday 3rd XI Captain, he gave Richmond debuts to two future Richmond captains, one just turned 12 (his own grandson, Dai Thomas) and the other a diminutive 11 year old wicket-keeper.

If Pearson, Gibbons and Neate were to go on to serve the club magnificently for many years to come, another outstanding Richmond man to emerge after the war was Tom Outhwaite. Outhwaite, who hailed originally from Yorkshire, was never a great cricketer playing mostly down the sides, bowling slow off-breaks through until the 1960’s. However, off the field, he was a giant. A solicitor, he was an extremely able administrator, who was very much at the forefront when Rosslyn Park left and London Welsh arrived, becoming the first Chairman of the Old Deer Park Partnership. In his retirement he was a permanent fixture at Old Deer Park where, not only was he President and later Life Patron, he was most usually seen in his Richmond blazer tending the flower beds around the pavilion. When he passed away in the early 90’s, his estate was used to establish a charitable Trust for the benefit of Old Deer Park. The first major project funded with Tom’s money was the verandah in front of the pavilion, the last the Tiger Turf Courts laid down in 2015.