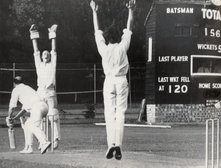 For your correspondent, the 60’s saw the arrival at Richmond of many of the ‘heroes’ who I later aspired to and did play with just over a decade later. Some have sadly left us but many are still around, some pop down to Old Deer Park from time to time and many are still keen to find out how Richmond is getting on.

It was also the decade when cricket in London began to think about adding a competitive edge to the club scene through the formation of Leagues and cup competitions, an introduction to cricket in the South-East that had previously considered to be abhorrent to the ‘civilised’ amateur game that had traditionally been played.

At the start of the decade, league cricket was still some way off but Richmond continued to thrive, boosted by more youthful and talented cricketers to join those who had established themselves during the 50’s. 1960 saw the arrival of a hugely competitive Rhodesian architect, Terence Woram, who was to become an ever-present at Old Deer Park for the next 58 years and the highest run scorer in the club’s history. In 1964, Terry took over as Captain of the Whole Day XI a position he held for 7 seasons. During this time, he introduced such things as fielding practice and winter nets to Richmond’s previously genteel cricketers and developed his reputation as being difficult to remove from the crease. The architect behind the outdoor toilet block and the patio, Terry served the club in many different capacities and his love for Richmond lasted until the very end.

Others to arrive in the early 60’s included Pat Neate, (the younger brother of Francis), Frank O’Gorman (son of Joe and a most elegant wicket-keeper) and Philip Bulsara (a devasting batsman from India not dissimilar in style to KD). Alongside those who had arrived earlier – Homewood, Eric Waight, McKiernan, Hunkin and Champniss – a very good team began to come together.

1963 saw the arrival of another Richmond Legend, Terry Harris whose presence at Richmond over the next 32 years until his premature death in 1995 was to influence so many. Terry was a fine cricketer and captain who was often drafted into Richmond’s cup sides whilst a 2nd XI player in the 80’s because of his skill as a seamer. An original Richmond tourist (about which there will be chapter to follow), Terry was Richmond’s first 1st XI League captain and also became the first Richmond Captain to win a League title at any level when his 2nd XI won the title in 1982.

And it wasn’t only players who arrived in the 60’s to influence cricket at Old Deer Park. At the very end of the previous decade, Richmond’s groundsman of many years announced his retirement and Francis Neate Senior moved quickly to find his replacement. Ken Sayles was not only an excellent groundsman, he had also been a very good cricketer at minor counties level for Berkshire. Neate poached him from Reading School but there was one proviso. Ken required accommodation. Land on Old Deer Park was identified, permission granted by the Crown Estate and the Head Groundsman’s bungalow was built.

As the decade went on, things began to change. In 1965, the square was completely relaid and whilst it was ‘interesting’ for a couple of seasons, by the end of the decade it was highly regarded. At the same time, there was increasing talk of league cricket. The Evening Standard introduced a London-wide Table – not a formal league as such but it provided club cricketers with a taste of what might be. Spilt between North and South London (Middlesex and Surrey), this competition became increasingly important. At that time, it was only Richmond’s fixtures against Surrey clubs that counted. Little surprise therefore that towards the end of the 60’s, Richmond was invited to become founder members of the Surrey Championship. The members of the club turned this opportunity down for two reasons – firstly, for many League cricket remained an anathema. But for those who were keener, the prospect of Saturdays travelling around the South Circular and down to distant places like Guildford, was not attractive. Thus in 1969, when the Surrey Championship formed, Richmond had nailed its colours to the Middlesex mast, a connection that has now seen Old Deer Park used by the county for 20 years as one of its grounds away from Lord’s.

There are two other developments from the 60’s that cannot be overlooked. By this time London Welsh had become the pre-eminent rugby club in the United Kingdom. Crowds of 4,000 plus were a regular occurrence as some of the finest young rugby talent in Wales – JPR Williams, Gerald Davies, Mervyn Davies and John Dawes formed the nucleus of an outstanding side. The old pavilion was simply not big enough and so it was decided that a new clubhouse would be built. Whilst the project was driven by London Welsh, the Cricket Club insisted on two things – a balcony for the changing rooms and a wooden-floored tearoom so that payers could come straight in without having to remove their spikes. One remains, the other has long gone. The new pavilion was opened in October 1969 by the Prince of Wales. 50 years on, it is showing its age but there should be no doubt that it has served all of the clubs at Old Deer Park well for half a century.

Finally, the 60’s saw the arrival at Old Deer Park of the Goldie family, starting not with Dad Hugh but actually by Steve, at the time at school in darkest Somerset and at a loss for things to do in the Summer holidays. It was decided that he should join a cricket club and Richmond was the one selected. The year was 1965. A couple of seasons later, Hugh also joined and whilst his younger son (your correspondent) was too young to play at that time, he nevertheless was a very regular watcher, trainee scorer and ball-boy from that time.