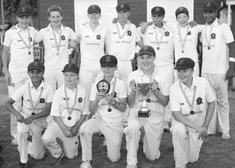 In our second in the Retro Rangers series we look back to 2018. This was an amazing year for RCC Juniors when we won the Middlesex Colts Association Victor Ludorum for the first time - and no record was better than the U14s. Relive the climax to their stunning season (and look out for more from this age group in future articles).

Mid-morning and bad news arrived from Spain. Rhys’s plane had not left and he would not be arriving in time to play. Charlie, who was at the ground to support, was drafted in to play alongside older brother James - meaning all three would be playing at Teddington, with Jack playing for the U11s. Would this be a good omen, with Nelson senior (still twirling for Bronsbury CC) having taken 5 wickets, including a hat-trick, at Teddington the day before?

As we journeyed through a sun-soaked south west London word was coming through that Uxbridge had scored 180 vs Ealing in the first semi-final. That is a lot of runs! “But not against our bowling, boys!”. By the time the team assembled at Teddington Cricket Club it was clear that Uxbridge would be defending the title that they won as U13s in 2017. Time to focus on the second semi-final against Sunbury.

RCC U14 have a fantastic record in the head-to-heads - though this was clearly the strongest team that Sunbury had fielded against us. Sandy won the toss and chose to bat. Eddie and Sandy came flying out of the blocks rightly playing aggressively with such a deep batting line up. The score was on 36 when Sandy was caught for 29 in just the 4th over. Will came and went for a breezy 16 and when Arjun and Eddie fell in consecutive overs it was possible that the innings would stall from 80 for 4 in the 11th. Vansh, Kyle and Huw all scored fluently in support of a stunning 38 not out from Dan. 162 for 6 posted. Sunbury’s strong batting line up started smoothly and were starting to get hold of our spinners until a key 5th over. The ball was lofted to mid-wicket and Will came tearing in from the the boundary, grabbed the ball on the bounce and unleashed a rocket of a throw to break the stumps at the bowler’s end. OUT! In walked Sunbury’s top batter only to be drawn into a false shot by Kyle and caught well at point first ball. When the third wicket fell to Arjun in the 8th over with 50 on the board RCC were in a winning position. A fighting 4th wicket partnership meant that the game was still alive with 4 overs to go. Excellent death bowling from Alex and Dan yielded 20 for 3 from the last 4 overs with Dan taking 2 for 8. It was a good win against an excellent team and the boys were out on their feet with just 30 minutes break before the final against a rested Uxbridge.

This is when the support team kicked in. The boys were ushered into the relative cool of the club house and cold drinks, sandwiches, pasta, sweets and ice-creams were sourced to rehydrate and recharge a tired group of young Rangers. Now over to the captain to win a crucial toss. Batting first was very important to prevent two consecutive stints in the field. And Sandy came up trumps.

How much was a good score? Once again Eddie and Sandy got the team off to a rapid start. Sandy fell with 39 on the board after 4.1 overs. Could the boys keep the rate going? Will fell after 6 overs and then a combination of canny bowling (very, very slow spin) and a scattered field (at times there were 8 on the boundary) brought the rate right down. There must surely be a case for a rule change to introduce some fielding restrictions. Overs 5 to 12 yielded just 39 runs. With pace back on the runs started to flow. Arjun picked up the rate before a good run out brought his innings to and end. Eddie reached his 50 and Kyle brought impressive energy to the running between the wickets. Dan then joined Eddie, who finally fell for a sublime 77, and Dan provided a cameo of 15 not out off just 10 balls. 142 was fewer than it might have been, and 40 fewer than Uxbridge has scored in the morning. But not against this attack…..

Alex set the tone and bowled full and quick and Kyle was right on the spot. In the third over Alex had one of the Uxbridge openers caught behind to a snorter. Game on! Now this fixture has history. Last year the other Uxbridge opener had won the game almost single handed and he set about constructing the innings. Tight bowling from Kyle and Arjun (and a wicket) slowly increased the pressure and Uxbridge had to start taking some risks. After a few balls had landed between fielders, James ripped one past the outside edge and Huw removed the bails in a flash (3 stumpings and a catch in the final). The key wicket had fallen. A second in the over pushed home the advantage - 87 for 4 off 14. Vansh (spinner number 4) took 3 for 21 and Alex closed it out. The close defeat of last year converted to sweet victory in 2018.

Rhys arrived from Spain just after the innings break in the final and boosted morale. Charlie N fielded like a hero all day. And the support team kept the show on the road.

This has been an incredible season for this age group: MCA div 1 won; MCA div 2 won; MCA cup shared by A and B teams; MSL div 1 won; MSL div 2 won; MSL Cup won; Middlesex County League won. The clean sweep. All the boys who’ve played for RCC this season and all who help them are a credit to themselves and to the club.

Link to our Appeal