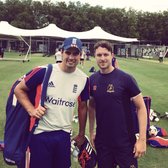 Who We Are - Steve Stacey

As KP would say, 'that's just how I play'. I like to be aggressive and attack, but I’m not one of those bowlers who chats rubbish
Steve Stacey - RCC left-arm slinger

How did you get into cricket?
Watching the 1989 Ashes when Terry Alderman kept getting Graham Gooch out lbw and England got absolutely pumped. I grew up in an era when touring teams always had exciting pace bowlers. The Windies, Wasim [Akram] and Waqar [Younis], Allan Donald, Dion Nash and Chris Cairns. But I only played a bit of state school cricket and that was it. I never got any coaching until I joined Richmond.

How did you first get involved with Richmond?
The infamous Jamie Carter got me involved at Richmond in 2009. I was 31, living in Bow, east London, and hadn’t played cricket for a few years. My first game was an inter-club friendly at Imperial College, Teddington. It was a bit of a shambles and felt like an audition for the Addams family such was the weird spectrum of people playing that day.

What have been the highlights of your time at the club?
Tour is always great fun. Anytime spent in the bar with your club mates. Winning the 2nd XI title under Whinge [David Harding-Smith] in 2010 was a real highlight. My first five-wicket haul for the 1st XI against Enfield made me feel like I could cut it at that level, despite it being Division 2 at the time. Getting promoted back to Division 1 with the 1st XI in 2012 and playing for several seasons in a side that would become a force in that league was really satisfying. With my club hat on, seeing the 1st XI do the double [in 2018] was fantastic.

I've never seen a club bowler hit batsmen in the head as much as you do. Do you get a kick out of intimidating batsmen?
I’m competitive and up for it on match day. As KP would say, 'that's just how I play'. I like to be aggressive and attack, but I’m not one of those bowlers who chats rubbish.

You have a distinctive, slingy left arm action and England once got you in as a net bowler to replicate Mitchell Johnson, Starc etc. What was that like as an experience?
I did bowl at the England team at Lord's and Edgbaston, but I think they just wanted to face some left arm bowling as opposed to some Johnson / Starc replica. I’d be pro if I was that good. It was an amazing experience though, especially bowling at the Essex legend [Sir] Ali Cook (see photo - Stace is the Essex Boy on the right, proudly wearing his RCC kit).

You're heavily involved in the social side of the club. How important is that to you?
Despite my so-called 'miserable / angry' demeanour, I actually really enjoy getting involved in that side of things. I’ve hosted a couple of quizzes and did an end of season awards speech, which is normally reserved for someone funny, so read into that what you will. It's important to make everyone feel like they are part of a club and not just a team.

For the latest on our Appeal and how you can help please click here.

Click here for the rest of the Who We Are series.