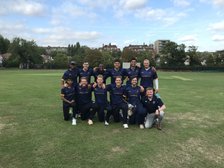 In the third of the series Richmond's 1st XI secure the 2018 Premiership title with a superb win at Hampstead.

[Celebrations]..were to go on long into the night as the lads engaged in much merriment and mayhem
Chris Goldie - RCC Chairman

As we launch our appeal to the senior section of the club it seems fitting to choose this famous day for the next instalment in our Retro Rangers series. Click here to also read the report on the Cup Final when the Rangers landed the double.

A memorable Saturday for Richmond as the 1st XI convincingly defeated Hampstead to secure their 14th win of the season and the Middlesex Premier league title. Elsewhere there was a comfortable win for the 3's, defeats for the 2's and 5's and a low-scoring tie for the 4's.

Greg King lost the toss at Leamington Road and Richmond were invited to bat. The early loss of Cormac McLoughlin was overcome by a partnership of 41 between Will Phillips and Ben Compton. Phillips' departure was followed closely by that of Abhishek Jhunjhunwala to leave Richmond on 70 for 3. The pitch was slow and boundaries were hard to come by as Adam London and Compo saw us through to 99 for 3 at drinks. Compo went tamely after the break and was followed shortly afterwards by Greg. We were 114 for 5 and a target of 200+ seemed a long way off. When Adam went with the score on 133 for 6, Richmond could have been in trouble but enter the side's longest-serving player, Alex Griffiths, who, with the support of Daniel Stanley and Bhavesh Pankhania, guided us through to 227 for 8 off the 50 overs with an outstanding 51 not out. In the opinion of at least one watcher, that was a more than adequate total on that pitch and with our strong bowling side.

We knew that Hampstead's batting strength is at the top of the order and so a good start was required. We got it as David Burton bowled an outstanding spell with the new ball, removing Hassan for 2 and conceding just 7 off his opening 5 overs. Meanwhile a direct hit from Abhi saw off the dangerous Adair and the hosts were 8 for 2. As the spinners turned the screw Hampstead went big and Richmond's fielding was superb. First Abdullah Nazir took a very good catch in the deep, Will bowled Watson before Daniel Stanley took a truly fabulous catch, running from long-on to long-off to leap and grab with two hands to dismiss Hughes. Jarring his knee in the process, Dan was then moved to slip where, on the stroke of drinks, he grabbed another good catch and Hampstead were 81 for 6. Whilst the match was not won, you could sense that the momentum was well and truly in Richmond's favour. Kingy took two catches at mid-off, the first a superb dive forwards, and the stage was set. Burts was reintroduced and within 4 balls had the 9th wicket, man of the match Griff diving to his left. 108 for 9 and it was a matter of when rather than if. Abdullah bowled, Roberts struck out and Will Phillips leapt high to catch. Realising that he was falling over the boundary, he got both hands to the ball but decided to release it back into play. A leg-bye followed and Roberts was facing. Abdullah gave it some air, Roberts swung but this time failed to connect. The wickets were broken, the Championship was won and the celebrations began. They were to go on long into the night as the lads engaged in much merriment and mayhem.

The 2's by contrast had a disappointing day. They invited Teddington to bat and the visitors scored 233 for 6 off 45. Jack Timmins was the pick of the bowling with 3 for 18 of his 9. Richmond's reply began in the worst possible way, reduced to 12 for 4. The recovery was led by Sam Goodwill, with support from Kshitij Desai, Tanmay Thanawalla, Matthew Alexander James Dickinson and Anirudh Muraly, but it was not enough. 179 all out. The 2's are now in 6th place.

The 3's travelled to the Paulin Ground to face Hampstead and won by an impressive 116 runs. After the loss of early wickets Richmond's recovery was led by an outstanding 93 not out from Huzefa Sajawal , 52 from Zain Bhaskar and 43 from Ben Rotheram. 241 for 5, having been 38 for 3, was a superb effort. Barnaby Cole led the way with the ball, taking 4 for 40 as Hampstead were bowled out for 125. The win leaves the 3's in 3rd place but now just 2 points behind Hampstead in 2nd.

The 4's batting let them down against Indian Gymkhana 3's and it was only thanks to Sean Matthew Austin's hitting at the end that we reached 119. In reply Indian Gym slumped before a last wicket partnership took them to the brink of a 1 wicket win. But skipper Christian Laws threw one up, the batsman missed and the tie was secured. The 4's are 5th in the table.

The 5's promotion challenge stuttered as they lost by 39 runs against Wembley 4's.

So one Adult title secure with the prospect of a League and Cup Double ahead. This is the 5th Middlesex trophy won by the club this season and there are 5 more to play for. Its already an outstanding year. Can it be even better?