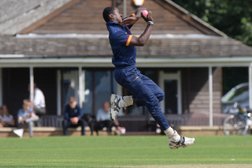 David Burton is one of the most respected cricketers in the Middlesex League. Relaxed off the field but fiercely competitive on it, he leads by example as a senior player at the club - while his career is testament to how tough the sport can be.

By his own admission, David was never the most talented youngster. Inspired by his Caribbean heritage, he grew up ‘addicted to speed’ and learnt his skills ‘the raw West Indian way’. Through sheer hard graft, he secured trials with four county 2nd XIs, but it wasn’t until he reached his fifth county, Gloucestershire, that he made his professional debut. He scored an unbeaten fifty but went wicketless and his career continued its nomadic path, accruing two five-wicket hauls across seven first-class appearances for Gloucestershire, Middlesex and Northamptonshire.

David played his last first-class game in 2012 and was brought to Richmond in 2014 by former club coach Peter Wellings. In 2018 he formed a formidable bowling partnership with former Rajasthan Royals spinner Abishek Jhunjhunwalla, the duo taking a combined 80 wickets as Richmond won the league with a record points haul. But it is the professionalism and good nature that he brings to the dressing room - and as head coach of the club’s development side - which is valued above all.

‘When I had my trials I had to be the best bowler on the pitch and I had to do that consistently,’ he says. ‘I had ten years trying to make it work and it’s tough knowing the dream is over, but that experience has brought out many qualities and I still maintain that intensity when I play for Richmond.’