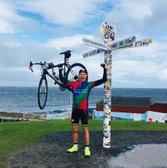 Ian is the man behind Richmond’s all-conquering U13s side. In 2018, the then U11s claimed a thrilling last-ball victory over Teddington in the County Finals, but it was their triumph in the Gubby Allen trophy at Lord’s the season before that remains their crowning glory.

The team had to win ten matches, including five in one day, just to get there, before they rolled Eastcote to become the first Richmond side to win a Lord’s final. The day was recorded for posterity by a professional videographer and the video is linked to this article.

‘It was such a special day,’ says Ian. ‘Playing on the Nursery Ground in beautiful weather in front of friends and family. As a parent [Ian’s son Thomas plays in the team] and as a coach, it’s a day I will remember for a very long time.’

Ian spent 20 years working in the city before pursuing a career in coaching. He now does the gig seven days a week and has set up his own business specialising in cricket, hockey and football coaching (Tabor Sports Coaching) at schools and clubs. He had been due to complete his Level 3 ECB coaching badge, which included an eight-day course at Derbyshire CCC with Mark Ramprakash and Peter Such, but the lockdown has put his final assessment on hold.

In the midst of it all, Ian still found time to cycle from Land’s End to John o’ Groats in 2018 to raise money for the Lord’s Taverners. Ultimately - and despite his side’s impressive record - he knows the game is about more than winning. ‘It’s the social side, too,’ Ian says. ‘A lot of the boys and girls make friends through the cricket club. Even if they’re not playing competitively, it plays a big role in a lot of people’s lives.’