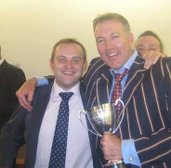 An allrounder born in New Zealand...are you Richmond's answer to Ben Stokes?
Sadly not. I bowl half the pace, hit the ball half as far, have zero tattoos and do not have a Geordie accent. My parents are very much English, but worked in New Zealand for 15 years and my sister and I were born and bred in Auckland. I moved to the UK when I was seven.

How and when did you first get involved with Richmond?
In 2017, I found myself as a grad in south London, living with Rob Gibson and Will Jenkins [fellow Durham University graduates and now Richmond 1st XI teammates]. Our other housemate at Durham was Cameron Steel, who was living in the Middlesex CCC house at the time with Ryan Higgins, a then Richmond player. He gave a glowing recommendation and the rest is history.

What do you remember about your debut ton for the 3rd XI against Uxbridge?
We had a very strong team and steamrollered them. I got a lift back to Old Deer Park in Steve Deakin's Kia Sportage, which surprisingly has been traded in for an Aston Martin.

How do you feel about taking on the 1st XI captaincy?
Greg [King] did a fantastic job in leading the team to the double in 2018 and it will be difficult to fill his shoes. He has been giving me some tips over the winter, such as the best place to get my haircut and the preferred red wine of league umpires.

How would you describe your leadership style?
Friend first and a boss second. Probably an entertainer third. Sorry, I had to.*

What have been the highlights of your time at Richmond?
It's hard to look past winning the league and cup double in 2018. The team that year was without peer. In terms of one stand out game, actually after we'd won the league, was when Dan Stanley [former Kiwi overseas] hit an unbelievable 80-odd to win the game nine down against Ealing. This reaffirmed our status as league champions against an exceptionally good side that year.

Any highlights from your mini first-class career for Durham MCCU? Solid average of 8.25 with the bat. Seven wickets at 38.85 is pretty respectable, in fairness.
It was a very brief, tough and rewarding fling. I played those games predominately as a bowler, of course I now use that as an excuse for a batting average of 8.25. I'm not too disappointed to have fallen victim to Chris Rushworth on a green seamer at Chester-Le-Street. With bowling, it was an interesting experience, the margin of error is so small that what you're required to do is very simple: hit an area for 15 overs a day. However, in terms of famous scalps, as my girlfriend will tell you, I like to name drop these a lot. I dealt strictly in England openers for a while, [Mark] Stoneman and [Keaton] Jennings are firmly in the pocket.

Do you agree that the club is worse off by having so many Durham graduates?
Four of the last five captains at Richmond have been Durham graduates, apparently. Read into that what you will.

How do you think others at the club would describe you, both as a player and a person?
I literally have no idea. I hope nice things.

*If you don't get the reference, I suggest now is as good a time to any to binge watch The Office [UK, obviously].