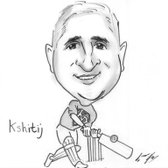 KD eats, sleeps and plays cricket. In no particular order, often at the same time. KD plays cricket in self-isolation. KD is probably in the nets right now.*

In fairness to the man, it works. With more than 4,000 runs in 152 league games, he is the club’s fourth-highest scorer of all time. His 296 wickets at 13.50 puts him third on the list of leading wicket takers. But most of all he hits the ball really, really hard - and straight.
It’s a style made in Mumbai. Kshitij - as he may once have been known - grew up playing 10-over cricket on narrow streets with high-rise apartments on either side. Every ball had to go for six and the only way to hit one was back over the bowler’s head. There is minimal footwork, but maximum intent. When KD bats, the field is spread.

In 2008, his job with drinks giant Diageo took him to London, then Richmond via colleague and former club captain Richard Barlow. In the decade since, KD has won countless games single-handedly for the 2nd XI. Two remarkable performances stand out: In 2017, he took 9-81 in a 25-over spell against arch rivals Ealing, but his 211 in less than 35 overs against Highgate in 2019 trumps the lot.

His 15-year-old son Ayaan now plays for the 3rd XI (as well as last year's powerful U15 Boys side) and the Desais and Richmond are inseparable. ‘The club means everything,’ KD says. ‘Other teams keep asking me to move over. I just can’t. I don’t have the heart because Richmond has given so much to me. It’s got amazing people, phenomenal facilities. If I ever moved club, my wife would kill me.’
See, Richmond is just one, big, happy family.

*These nets currently take the form of the Desai’s back garden. There is no suggestion that KD has made use of club facilities during the Government mandated lockdown.