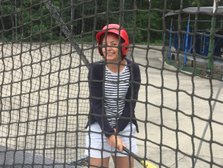 7. Who We Are - Fiona Barbour-Smith

Fiona and cricket are unlikely bedfellows. Growing up in the small village of Innellan in west Scotland, there was basketball, netball, athletics, hockey and shinty (hockey without rules, apparently), but none of that dafty stuff the English played. Her first encounter with the sport was through her husband - a ‘posh’ Scot from the east coast - and a couple of games at Lord’s in the late nineties. But even then it appeared to be ‘just an excuse for a few glasses of fizz’.

It was the wee nippers that set the ball rolling. Fiona’s eldest son, Ruari, ‘endured’ cricket for a few years but soon realised it was not for him. Possibly because he played for Ealing. Then daughter Molly was introduced to the game by Richmond junior coach Richie Stubbs at a charity event for Grenfell Tower in June 2017. ‘She tried it out, loved it, and we are now a cricket clan,’ Fiona says.

Molly now plays for Middlesex and Richmond U13s, while Fiona runs Richmond U14/U15 girls. It’s a part of the club that has grown exponentially over the past decade. There are currently more than 100 girls from ages six to 16, playing in 14 leagues and two cups. Some sides play in both boys’ and girls’ leagues and girls rack up four games a week including school and county. In 2019, the U13 girls were awarded the Spirit of Cricket award for the U12 Mid-Surrey boys’ league.

The reward for all that hard work was the U13s’ run to the National Finals of the Lady Taverners Cup last year. Having never previously gone beyond the first round, the girls became South of England champions, beating Tunbridge Wells in a thriller, to progress to the finals in Cheshire where they finished third. The icing on the cake was ECB hospitality at a spa hotel and a chance to hold the Men’s ODI World Cup won by England the week before.

‘RCC has become a huge part of our lives and for the girls it is a really special part of their summer,’ Fiona says. ‘Girls’ cricket in this country is growing fast and everyone's support for the club over this difficult period will hopefully mean we will be able to keep the RCC girls section on an upwards trajectory. Lady Taverners national champions on the next attempt perhaps?’

* Send guesses to juniors@richmondcricketclub.com. Closest by month gets 10% off next season’s subs (all answers will remain unpublished and any such saving you will of course donate to our Appeal! - Ed).